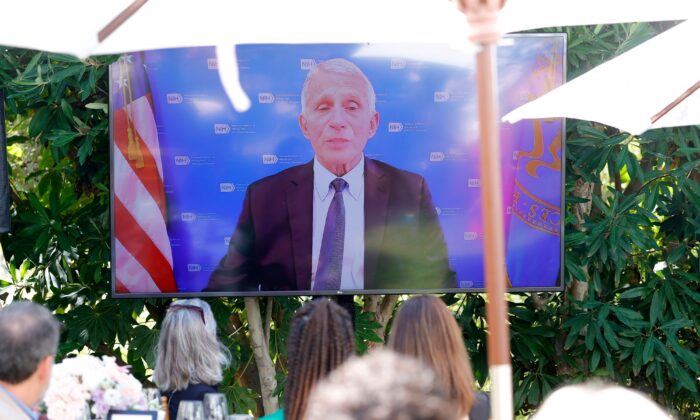 So, St. Anthony Fauci has come down from his mountain top with a new list of “thou-shall-nots” and the news that it is “too early” to say whether he will allow families and friends to congregate for Christmas.

It isn’t too early for the body politic to engage in one gigantic spasm of retroperistalsis and expel that tyrannical medical pest from the community.

After all, Dr. Fauci is the chap who tells anyone who will listen that, when it comes to vaccine mandates, “There comes a time when you do have to give up what you consider your individual right of making your own decision for the greater good of society.”

Ah, yes, “greater good of society”—as defined, it goes without saying, by A. Fauci.

It’s long past time for this fomenter of hysteria to go. He has been terrorizing the American populace for decades.

Give him a padded cell, a mirror, and a TV camera and he will be happy.

In the 1980s, Fauci was a superspreader of the myth that an important vector for the transmission of HIV was heterosexual intercourse.

For the past couple of years, he has been terrifying the public with tales from the crypt about the virus he helped develop with U.S. taxpayer money for “gain-of-function” research in a Chinese virology lab in Wuhan.

The fact that this Bela Lugosi of the medical establishment also is a publicity addict who can’t pass a television camera without primping and dispensing contradictory but depressing dicta makes him a public nuisance.

You see his baneful influence everywhere.

In our former newspaper of record, for example, The New York Times.

On Oct. 1, the NY Times ran one of its long emetic specials on COVID, the Delta Diaries.

Deploying their signature mixture of nauseating human interest pabulum and tendentious statistics, they paid homage to the CCP virus for giving them something to write about now that Donald Trump is, for the time being, off the menu.

Remember the old saw about “lies, damned lies, and statistics”?

The NY Times specializes in that wheeze.

The CCP virus can be serious, no doubt about it. But it represents a significant threat to a tiny part of the population, mostly the elderly, especially those with certain co-morbidities like diabetes and obesity.

The Spanish flu, by contrast, cut a wide swath through the young and healthy.

The so-called Delta variant seems to be more infectious but less virulent than the original.

It has affected some younger people, much to the delight of the NY Times and other members of the Fauci fan club.

But the NY Times story is just the Gray Lady version of a domestic-strife story like those in the sensationalistic rags you see in the supermarket checkout line: “Betts and Andy on the Rocks: What Really Happened on Their Honeymoon.”

Now, on to those numbers.

One critical distinction you won’t find mentioned in the NY Times’ cri-de-coeuris is the difference between dying from the CCP virus and dying with it. Millions upon millions are infected.

It is, after all, a very contagious virus.

Remember the chap who was in a fatal motorcycle accident, spread like jam across the highway, but had his death listed as due to COVID because the goo “tested positive”?

Another set of numbers you rarely see in the reporting about COVID fatalities is the age of the people who died.

The average life expectancy for males in the United States is around 78.

If Mr. Smith, who suffers from diabetes and high blood pressure, comes down with COVID and dies at 87, is his death due to COVID?

You see why I like to say that the great thing about COVID is that it abolished death from old age.

Last year, there were some 700. Amazing.

The CCP virus is a seasonal respiratory virus. The key to public health regarding it is the achievement of herd immunity.

Harvard epidemiologist Martin Kulldorff and Stanford’s Dr. Jay Bhattacharya got it exactly right when they wrote last spring that “the idea that everybody needs to be vaccinated is as scientifically baseless as the idea that nobody does. COVID vaccines are essential for older, high-risk people and their caretakers and advisable for many others. But those who’ve been infected are already immune.”

At last, the clear voice of common sense—which is also, by the way, the voice of that “science” we’re supposed to be following.

Messrs. Kulldorff and Bhattacharya go on to offer these wise observations:

What a pity that the media didn’t elevate experts such as Martin Kulldorff and Jay Bhattacharya to the sacrosanct position it saved for Anthony Fauci.

We all would have been saved a great deal of irritation, not to mention economic ruin and political despotism.