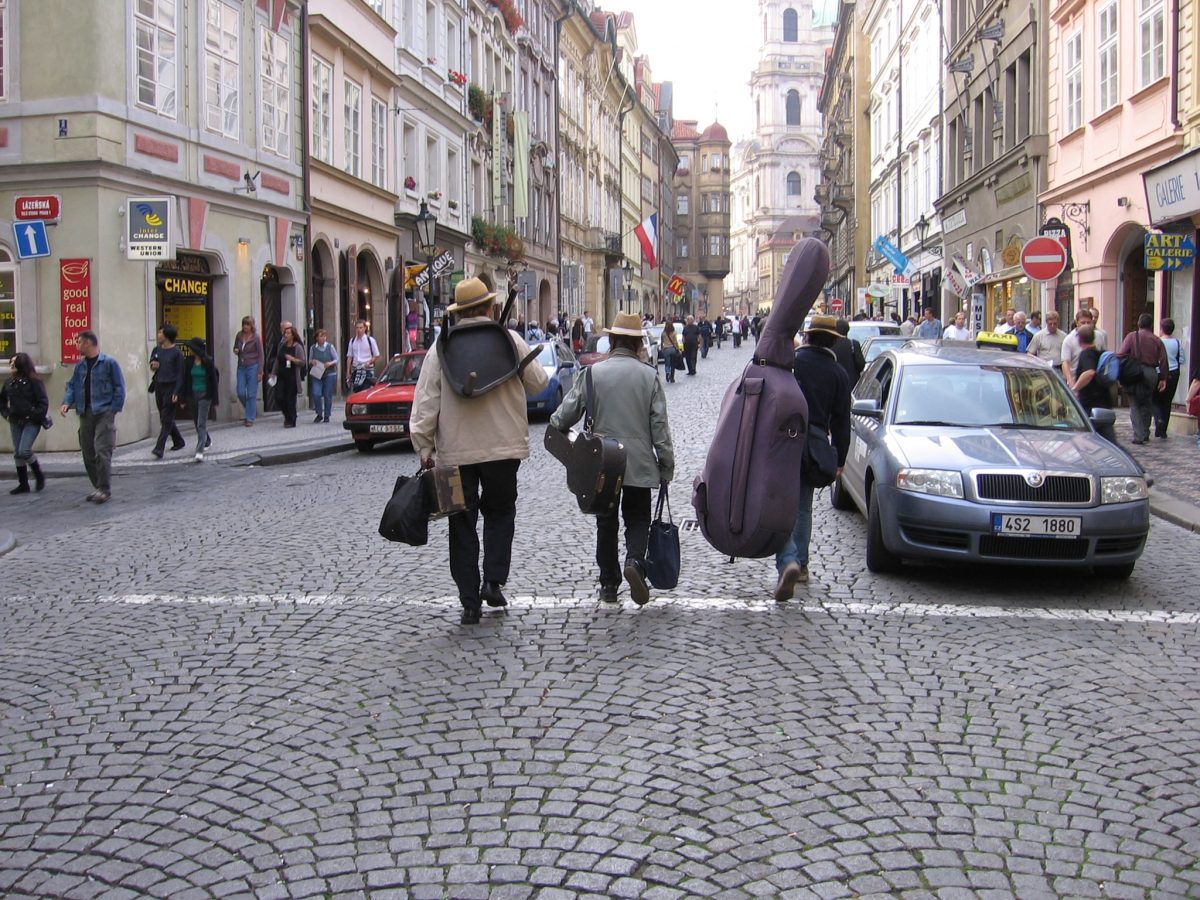 Street musicians on a street in Prague, Czech Republic. Music is heard at almost every corner in the old Bohemian city. (Edward Melnychuk)
Travel

The City That Breathes Music

At the crossroads of ancient trade routes, one finds the Bohemian city that Charles IV once made the seat of the Holy Roman Empire. Below a splendid castle, lies a labyrinth of medieval streets waiting to reveal their secrets.

The hub of modern Prague is Wenceslas Square in the New Town (Nove Mesto). It is just a few blocks from the Central Train Station and not far from the 18th century Estates Theatre where the world premiere of Mozart’s “Don Giovanni” took place in 1787.

Nearby is Na Prikope Street, once a moat that divided the Old Town from the New Town. If you follow Na Prikope to Republic Square, you will find the unique 15th century gate called the Powder Tower. Along with 12 other gates, it once formed part of Prague’s fortifications. This gate marked the start of the Royal Route used by kings and queens as they progressed along the street to Old Town Square, crossed Charles Bridge, went through the Lesser Town, then climbed up to Prague Castle.

Gothic towers and Renaissance spires, baroque gardens, sumptuous palaces, gilded roofs, turrets, and cupolas stretch as far as the eye can see in the city. Memories of the First Republic (1918–1939) blend to form a magnificent city for walking. If your feet get sore, there are plenty of trams, and an excellent subway system, as well as non-smoking cafés and wine bars aplenty. I particularly like Café Louvre.

I was lucky to be in the city in October, at harvest-time, when outdoor music was everywhere we went, from Old Town Square to Castle Hill, as well as in the part of the city called Lesser Town on the other side of the famed Charles Bridge.

Of course, there are groups playing nightly in chapels, churches, as well as splendid concert halls, but I loved the spontaneity of the various performers I met on the street: the gypsies playing in front of Tyn Church and those in Old Town Square; the itinerant violinist near Prague Castle; the folk musicians and the classically trained group playing Czech folk music at Hradcany namesti (Castle Hill), just opposite the entrance to Prague Castle.

I especially enjoyed the sole hurdy-gurdy player who played on Karluv Most (Charles Bridge), a medieval link ornamented with dozens of imposing statues. The bridge joins the Old Town (Stare Mesto) with what is known as Lesser Town (Mala Strana). It is a must-walk, lined as it is with sellers of art, jewellery, CDs, and of course, musical groups.

The hurdy-gurdy man (his name was Jiri Wehle) had tinkling bells on his ankles and was playing just 50 metres from the four-star Hotel Rott where we were staying. The hurdy-gurdy—a stringed instrument very popular in the early Middle Ages—is shaped like a lute, and the sound is made by the friction of a resined wheel turned by a crank. For a taste of Wehle’s music, you can find him on YouTube.

Of course, if you like your music sitting down, you can always book tickets to the “midday classic concert,” which takes place every day starting at 1pm in the Lobkowicz Palace, in the Prague Castle complex. The concerts include music by Bach, Vivaldi, Mozart, Smetana, and Dvorak. Tickets are available at hotels, city tourist offices, and also at the entrance to the palace. Visit: www.lobkowiczevents.cz

The Gypsy or Roma group we heard in Old Town Square was part of Gipsi Duhot, and the violinist I spoke to was Tomas Babica. People gathered to hear their soulful music, enjoying the surroundings as they listened. If you would like to hear more Romany (Gypsy) music, ask about a group called Bengas, visit the Lucerna Bar at www.musicbar.cz or enquire about Popo Café Petl, a music club in downtown Prague where Gypsy bands often play.

Springtime is also a great time to be in Prague because of the Prague Spring International Music Festival. Since 1952, the festival has opened with Smetana’s cycle of symphonic poems called “My Country” and closed with Beethoven’s Ninth Symphony. For a list of concerts, dates and ticket venues visit: www.festival.cz/en

If you’re looking to visit the city, my favourite hotels include the three-star Hotel Meran on Wenceslas Square and the five-star Hotel Pariz. As for eating, it is never a problem in Prague. Country Life restaurant has vegetarian food and smoke-free air (it’s between Old Town Square and Wenceslas Square). U Provaznice pub is famous for garlic soup and amazingly inexpensive Gambinus and Kozel beer. It also offers tasty lunch-time specials, such as old Bohemian style beef goulash with dumplings (off Wenceslas Square at the entrance to Mustek metro station). I also discovered Blatnice, a great wine restaurant where I had a glass of wonderful Blatnice white wine.