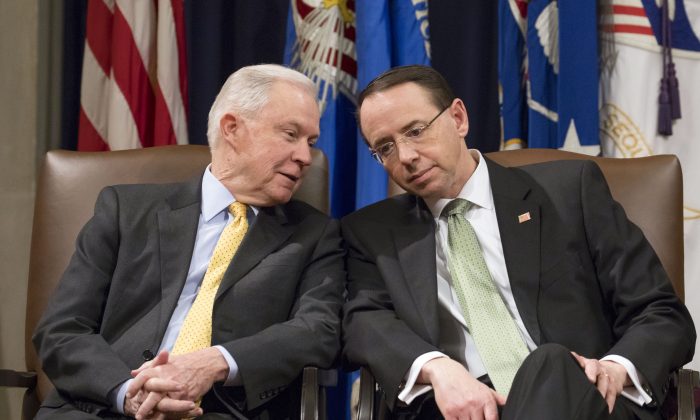 On the morning of Oct. 10, there was a brief furor in the news media after Deputy Attorney General Rod Rosenstein supposedly canceled a scheduled appearance before the House Judiciary Committee. Soon after, the news became confusing, as some reporters noted they had sources telling them no such meeting had ever been scheduled in the first place, so there was nothing for Rosenstein to cancel.

Epoch Times reporter Ivan Pentchoukov was one such reporter, who first heard that angry House Representatives were thinking about subpoenaing Rosenstein for ducking the scheduled testimony. There was even a press release, in which House Reps. Matt Gaetz (R-Fla.) and Andy Biggs (R-Ariz.) threatened to, at long last, subpoena the deputy attorney general.

However, almost immediately after that press release hit the wire, Pentchoukov was told by multiple sources on the Hill that there had never been any such scheduled testimony from Rosenstein, so there was nothing to cancel.

Why did Rosenstein need to have a sit-down with Trump? Because former FBI Deputy Director Andrew McCabe and former FBI general counsel James Baker had claimed that Rosenstein bragged to them he could wear a wire and get Trump to say something criminal on tape that he could then use to have Trump impeached by using the 25th Amendment.

The story in the media for the past week has been that Rosenstein was desperate to get a meeting with Trump so he could personally insist to the president that the wiretap story is not true, and beg Trump not to fire him. So, after waiting two weeks, during which some pro-Trump media salivated over Rosenstein’s supposed impending firing, Trump exited Air Force One and gave the bespectacled deputy attorney general a big thumbs up, saying he had a “great relationship” with Rosenstein and that Rosenstein’s job is safe.

Then, on Oct. 11, Rep. Bob Goodlatte (R-Va.), chairman of the House Judiciary Committee, which is supposedly locked in a year-long struggle with Rosenstein’s Justice Department (DOJ) over access to Spygate documents, was asked about efforts to subpoena Rosenstein. “We’re working on that,” Goodlatte is reported to have replied.

Several hours later, the House Judiciary Committee voted to subpoena … Fusion GPS founder Glenn Simpson, who promptly said through his lawyer that he intends to invoke his Fifth Amendment right not to testify if he appears.

While that was going on, The Washington Post broke a story about a long-running feud between McCabe and Rosenstein that finally culminated in an ugly confrontation when Rosenstein told McCabe—with special counsel Robert Mueller present at the meeting—that he was being removed from the “Crossfire Hurricane” investigation.

McCabe was the last big official still in place who was connected to the “insurance policy” to keep Trump out of office. This is why he so strongly resisted being taken off the Russia probe by Rosenstein. By that time, all of the others had been neutralized. By mid-May 2017, James Comey, John Brennan, James Clapper, Bruce Ohr, James Baker, Sally Yates, and John Carlin were all gone from their jobs inside the government. McCabe was the last holdout.

Peter Strzok and Lisa Page had been moved onto Mueller’s special counsel team, but they wouldn’t be there for long; both would be stripped from that team and placed in isolation while they were investigated, just three months after the confrontation between Rosenstein and McCabe.

By May 2017, any real threat to the president from the Crossfire Hurricane plotters had been spotted and the plotters either fired, demoted, or placed where they could be watched. Mueller’s team never had anything real to find on election collusion between the Trump campaign and the Russian government, which explains why Mueller is now furiously digging through the long-deceased Fred Trump’s estate taxes desperately looking for something—anything—he can use.

And in the middle of this chaos and confusion stands Rosenstein. I understand why a lot of people think Rosenstein is part of the corruption at the DOJ, but I don’t share that view. Jeff Carlson, who also writes here at The Epoch Times, just showed why I am not alone in this view with a brilliant column headlined “The Battle Between Deputy AG Rod Rosenstein and Andrew McCabe.”

While some people in media want to believe Trump is the world’s worst player at “Spot the Traitor,” I happen to believe he’s quite adept and astute at spotting people who are trying to hurt him, and equally as adept at dealing with them.

If Rosenstein were an actual threat to Trump, he’d have been gone long before this. The actual facts are that this is the guy who engineered the tossing of both James Comey and McCabe out of the FBI.

As I explained in an earlier column, there are several good reasons why Rosenstein has to withhold key documents from congressional committees, not the least of which is that several members of these Senate and House committees are under investigation for criminal leaks, as well as other illegal activity.

If Rosenstein were causing real problems, both Trump and Attorney General Jeff Sessions would have taken action, and it’s very telling that they haven’t. Trump just gave Rosenstein another very public vote of confidence. In addition, Sessions gave Rosenstein on Oct. 15 the high-profile job of leading a task force to target transnational criminal organizations, including Hezbollah and MS-13.

Remember what Trump said at his first press conference as president, “The leaks are real, the news is fake!” Most of what we are seeing in the media is deliberate disinformation. This includes most of what you’re hearing about Rosenstein.

For whatever reason, Trump has decided on a slow rollout, using a lot of disinformation, to hide what’s really happening from both the Democrats and their media allies. That means a lot of the chaos and confusion, which often centers on Rosenstein, is deliberate.

I think, in a few more weeks, we’ll know why.