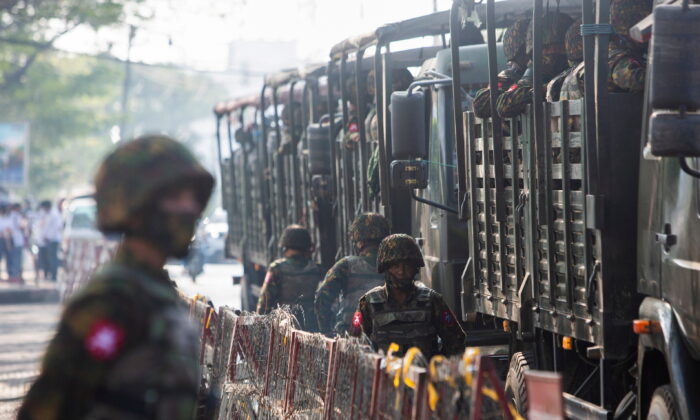 Soldiers stand next to military vehicles as people gather to protest against the military coup, in Yangon, Burma, on Feb. 15, 2021. (Stringer/Reuters)
Thinking About China

The Chinese Regime Continues to Fund the Murderous Generals in Burma

The actor Ashton Kutcher once said: “I don’t think opposites attract. I think like attracts like.” The only time we should be discussing opposites attract, he added, is when we’re “talking about magnetic poles.”

One wonders what Kutcher, a man who knows a thing or two about China’s plans for world domination, would have to say about the relationship between the Chinese Communist Party (CCP) and Burma’s tyrannical regime. Because, in this particular relationship, like very much attracts like. With despotic regimes and their circle of allies, the poisonous apple never falls far from the pestilential tree.

Almost a year ago, on Feb. 1, 2021, a coup d’état took place in Burma (commonly known as Myanmar), a small, landlocked country. On that ill-fated morning, the democratically-elected members of the National League for Democracy (NLD), then the country’s ruling party, were deposed by Burma’s military forces.

Fast forward to today, and Burma’s slide into absolute darkness, both figuratively and literally, is all but complete. As other countries decry the abuses occurring in Burma, the CCP continues to fund the murderous generals and their wicked plans. Then again, should we really be surprised? The CCP, perhaps the most murderous of all the communist regimes operating today, clearly views the Burmese stratocracy in a positive light.

And why wouldn’t it? After all, the CCP and the Tatmadaw, Burma’s military rulers, have many things in common. They abhor free speech, punishing citizens who dare speak out; and they abhor objective reporting, punishing journalists who dare speak the truth. They also control access to the internet with iron fists.

The Cost of Taking a Stand

In China, as many readers are all too aware, those who speak out often disappear. In September 2021, two activists based in Guangzhou essentially vanished into the ether. One of the activists happened to be Sophia Huang Xequin, a renowned and respected women’s rights campaigner who acted as a catalyst for China’s #MeToo movement. The other activist, Wang Jianbing, was known for decrying the country’s poor labor laws. She was planning to move to London for further education. Alas, her plans never came to fruition.

Where is Ms. Jianbing? How about Ms. Xequin? Are they alive, imprisoned, fated to rot away in some horrid facility, or are they already dead? We simply don’t know.

In Burma, meanwhile, activists who speak out are brutally murdered. In March of last year, as The Guardian reported, Zaw Myat Lynn, a much-loved community organizer, teacher, and activist with the National League for Democracy (NLD), shared jarring footage of soldiers killing peaceful demonstrators. Mr. Lynn took to Facebook to speak out, calling Myanmar’s ruling junta “terrorists” and “dogs.” Shortly after, he was murdered by these very “dogs.”

The ruling junta has the people of Burma—including the country’s journalists—living in a perpetual state of fear. Last year, Burma fell to 139 out of the 180 countries on the global press freedom index.

In China, members of the press are even less free. In fact, China is now the fourth worst country in the world for press freedom. Moreover, the CCP is now the world’s biggest captor of journalists. According to a recent report published by Reporters without Borders, aptly titled ‘The Great Leap Backwards of Journalism in China,” at least 127 journalists are currently being detained by the regime. Simply discussing sensitive topics “or publishing censored information,” wrote the authors, “can result in years of detention in unsanitary prisons, where ill-treatment can lead to death.” The CCP’s “intimidation of foreign reporters, based on surveillance and visa blackmail,” has also intensified, noted the authors.

The rulers in Beijing and Naypyidaw, Burma’s capital, also tightly control the internet, carefully monitoring the “digital diet” of the masses. The tyrants in Burma have sought to limit access to the internet, calling the online world a “virtual battlefield.” In China, meanwhile, the CCP continues to demand more access to data and greater say over content made accessible to netizens.

It should come as little surprise, then, that relations between Burma’s military regime and the CCP appear to be intensifying.

In a statement issued in December 2021, the junta’s ministry of investment and foreign economic relations announced plans to accept the yuan, the official currency of China, as an official settlement currency—all in the hope of boosting trade with the communist nation. Burma’s rulers praised the special “kinship” it shares with the CCP, thanking Beijing for supporting it financially and its continued delivery of vaccines.

In August of last year, as Reuters reported, more than 1,000 people had lost their lives since the coup took place in Burma. One assumes that the number has risen significantly since. Nevertheless, this hasn’t stopped the CCP from offering its support to the despots in Naypyidaw. In the world of geopolitics, as we can see, like very much attracts like.