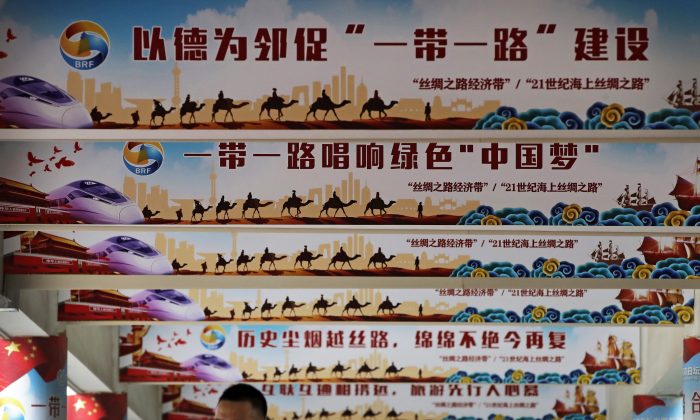 A man stands underneath the pillars displaying Chinese leader Xi Jinping's signature "China Dream" and "One Belt, One Road" foreign policy plan during an event in Beijing on June 29, 2018. (Andy Wong/AP)
Thinking About China

In 2012, Xi Jinping told the Chinese people that “only socialism can save China.” Although it was capitalism that dramatically increased the country’s living standards, Xi is leading the country back to the stricter socialism that kept China poor, decades ago.

Former Chinese leader Deng Xiaoping said that “to get rich is glorious,” which was consistent with his 1978 program of “reform and opening up.” By opening its markets to the world, and by allowing the economy to be driven by market forces, China was able to create a tremendous middle class and the largest number of billionaires in the world.

The “go out policy,” which began in 1999, promoted outward direct investment (ODI). It also encouraged Chinese companies to go abroad and learn from foreign firms, all of which resulted in China becoming the world’s second-richest country.

Xi’s return to greater socialist controls, turning away from the world, and cracking down on market forces suggest that he has forgotten how China became rich in the first place.

China’s economic “miracle” did not come from central planning, but rather from opening the country to free market ideas, basic economic principles, and allowing the private sector to grow, organically. This accelerated the country’s development, causing incomes to soar.

But Xi is now tightening his and the CCP’s grip over the economy, as he replaces sound economics with socialist slogans. He is pledging to decrease the wealth gap by “dividing the cake well,” rather than by instituting economic policies that help the poor increase their wealth.

“Xi Jinping Thought on Socialist Economy with Chinese Characteristics for a New Era” is the seminal economics work of the current Chinese leader. Xi is the first leader, since Mao Zedong, to have his own thought, entered into the constitution. Even the name of his collected musings is itself an ideological slogan, referring to the country’s system as socialism with market characteristics.

In practice, the system has become state-capitalism with socialist characteristics, where large, state-loyal companies are favored and controlled, while private enterprise and upstarts are restricted and suppressed.

In June, the first Xi Jinping Thought Center was opened. Two others soon followed, focusing on the study of Xi’s economic thought. In total, 18 Xi-thought research centers have been established, each dedicated to one of several topics, including politics, culture, science, education, religion, diplomacy, economics, and national security.

Xi-thought promises “to ensure that the market plays a decisive role in the allocation of resources“ that is consistent with a market economy; but then it stresses “the need to strengthen the Party’s centralized and unified leadership over economic work,” which is suggestive of greater central planning and tighter controls.

The cornerstone of Xi Jinping thought is “The Four Comprehensives,” which together, are meant to build socialism with Chinese characteristics. The Four are: 1) building a moderately prosperous society; 2) deepening reform; 3) governing the nation according to law; and 4) tightening Party discipline.

It is interesting to note that of the four, only the first one deals with economics. It is also the only one that promises a reward to the populace. The other three are Xi’s pledge for more government control.

Xi’s market socialism has a set of core values: “prosperity, democracy, civility and harmony; societal values of freedom, equality, justice and rule of law; and the citizenship values of patriotism, dedication, integrity and friendship,” according to the South China Morning Post.

But in a country with ever-intensifying state surveillance, and where people’s lives can be ruined by a downgrade of their social credit score, citizens are steadily losing their freedoms.

Similarly, the Chinese Communist Party (CCP) claims to be dedicated to democracy, but the country is effectively a one-party system. Minor parties exist, but they must yield to the leading role of the CCP. Furthermore, not only do the citizens not vote for their leader, but Xi now has tenure for life.

The mantra of socialism with Chinese characteristics allowed the CCP enough latitude to support business and economic growth, on the one hand, while maintaining restrictions over basic liberties, on the other. This system has held up, more or less, since 1978.

Xi, however, has clearly decided to rein in, not only the private economic sector, but also the private sphere of citizens’ lives. Xi has instituted a three-hour limit for children playing video games. He has banned “sissy looking” boys from TV and other media. And he wants the people to return to a common set of socialist values and morality.

State-run media Xinhua quoted Xi as saying, “The advantage of a big economy lies in its advantage of domestic circulation.” This is just a euphemism for turning away from the world economy. Rather than exports, Xi is now urging the people to focus on a domestic, demand-driven economy, while he is simultaneously impeding that economy from working.

“The economy is a dynamic circulating system that cannot afford a long-term disruption.” Xinhua quoted Xi, the same man who adopted a zero-covid policy and shut down parts of the Chinese and the world economies for nearly two years.

The damage that Xi’s policies are doing to China is spilling over to the rest of the world. Unless Xi releases his grip, the economy cannot recover. Until then, his market socialist slogans are just meaningless doublespeak.