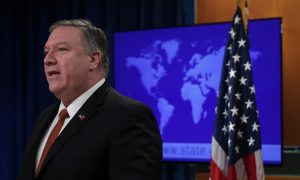 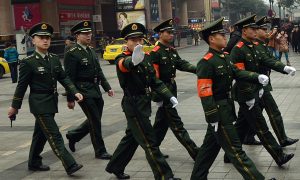 The Chinese Communist Regime is on the Brink of ‘Disintegration,’ Says Leading China Expert

The Chinese communist regime is heading towards disintegration and the West needs to be prepared to manage the fallout, according to a leading China scholar.

Arthur Waldron, China historian and Lauder Professor of International Relations in the Department of History at the University of Pennsylvania, made the remarks in a recent interview on The Epoch Times’ American Thought Leaders. He shared his views on the Chinese Communist Party’s (CCP) imminent collapse, U.S. foreign policy on China, and the relentless Hong Kong protests that have posed a major challenge to Beijing’s rule.

The CCP has started on a path of decline and is headed towards a similar fate as the Soviet Union when it collapsed in 1991, the professor said.

“I believe that China is in this stage of disintegration or ‘jie ti (解體)’, and it’s something that you don’t see immediately,” said Waldron.

The Chinese regime’s practice of forced organ harvesting—which results in an estimated tens of thousands of prisoners of conscience killed every year to supply its organ transplant market—and its treatment of Uyghurs and other Muslim minorities in the northwestern region of Xinjiang, made it “the most evil regime” since the Nazi Germany, Waldron said.

He recalled a conversation with an unidentified person, who is a close adviser to Chinese leader Xi Jinping.

“He said to me, Arthur, what the hell are we going to do? Everybody knows that this [political] system doesn’t work. We have reached a “si hu tong” (死胡同),” said Waldron said, explaining that the Chinese phrase means a “dead-end street.”

The adviser continued: “But what we don’t know is what is the next step to take because … there are mines everywhere and if we take a step, we may set off a terrible explosion.”

The Chinese economy is not high-flying as it used to be. The country’s third-quarter (GDP) growth rose 6.0 percent year-on-year, the slowest rate in 27 years. According to Reuters, the growth decline was attributed by economists to weakness in export-related industries, particularly the manufacturing sector.

“This regime knows it’s in grave peril, domestically,” Waldron said, before adding “So the real intellectual problem is how do you exit communism?”

After over two decades of diplomatic isolation, former U.S. Secretary of State Henry Kissinger, under former President Richard Nixon, opened U.S. relations with the People’s Republic of China by flying to the Asian country in 1971.

At that time, China was under the rule of former Chinese leader Mao Zedong. Kissinger’s visit paved the way for Nixon to visit China in 1972, the first U.S. president to visit China while in office.

“At that time even Mao Zedong himself felt that the [Chinese] Communist Party was going to collapse soon, but that visit from President Nixon and Kissinger saved the Communist Party,” said pro-democracy activist Wei Jingsheng in a rally held in Washington, D.C. on Sept. 2005.

The U.S. government’s decision to welcome China into the World Trade Organization (WTO) in 2001 also backfired, according to Waldron.

“We brought it [China] in as a way of trying to somehow coax them to be what Nixon and Kissinger dreamed they would be, which is to say they would learn from America and they start democratizing, but they didn’t do that,” Waldron said.

In fact, Waldron added, not only has China not become liberalized, the “party regime is tighter and better organized now than it was under Mao.”

As for now, Waldron pointed out that U.S. trade and investment, including those from the pension funds, into China, is keeping the Chinese Communist Party afloat.

“If they had to live on what they can get from their state-owned enterprises, which lose money, and from taxation, it would be a completely different situation,” Waldron said.

On Nov. 6, a group of bipartisan U.S. lawmakers led by Sen. Marco Rubio (R-Fla.) introduced a bill aimed to block a federal retirement fund from investing in Chinese equities.

Waldron believed that the current administration should “adopt really as hardline as possible” stance towards China.

In terms of the future US. foreign policy regarding China, Waldron said the current Secretary of State Mike Pompeo has a tough task at hand.

In Hong Kong, the ongoing pro-democracy protests are close to entering its sixth month with no end in sight, as police continue to be accused of using heavy-handed tactics to quell the demonstrations and the city government and Beijing refuse to meet protesters’ demands, thus fueling public anger.

“The whole origin of this [Hong Kong] crisis is disastrous decision making by the communist authorities, and then their failure to understand this and to let it protract,” Waldron said.

He explained that if Beijing had kept its promise made in 1997 and 1984, Hongkongers would only be concerned about heading to a polling place to vote every one or two years.

Hong Kong, the former British colony, was handed over to Beijing in 1997, after the two sides inked the 1984 Sino–British Joint Declaration. Under the treaty, the regime guaranteed that Hong Kong will retain its autonomy from the Chinese regime and its freedoms for 50 years.

Under the United States-Hong Kong Policy Act of 1992, Hong Kong is considered a special entity, separate from China, in matters of trade, investments, and visas. However, the special treatment might come to an end soon after the U.S. government recently enacted the Hong Kong Human Rights and Democracy Act, which requires the secretary of state to annually review whether the city is “sufficiently autonomous” from China to justify its economic privileges with the United States.

“I think the special status is over. I hope not, but I think it is over,” Waldron said. “I think that the police have been compromised, gravely. The legal system is now under attack.”

Recently, a defecting Chinese spy to Australia revealed that Chinese agents were behind the abduction of five Hong Kong booksellers in 2015.

As for the arson attack against the Hong Kong edition of The Epoch Times’ printing press on Nov. 19 by four masked men dressed in black, Waldron said that he suspected they were members of the triads.

“One of the features that we have seen and dramatized in Hong Kong is the close collaboration between the Chinese mafia or the triads and the [Hong Kong] government,” Waldron said.

When a government doesn’t want to listen to its citizens and wants them to stay in line, creating violence such as sending triads to attack people is an effective tactic because it would scare the population, he added.

On July 21, men in white shirts stormed the Yuen Long metro station and attacked passengers with sticks, clubs, and poles. The police did not arrive on the scene until about 45 minutes later.

Six days later in Yuen Long, when thousands of protesters took to the streets to protest against the metro attacks, Amnesty International issued a statement calling out the police as the aggressors for beating retreating protesters and attacking civilians.

“These 5 or 6 months … taught everybody in Hong Kong that the Chinese Communists are dangerous, odious, and absolutely not to be trusted,” Waldron said.