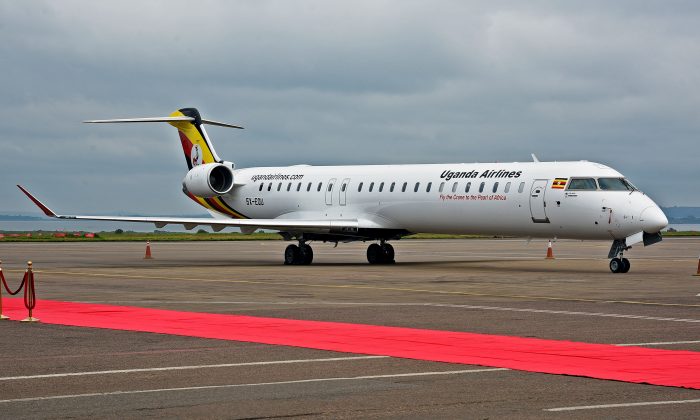 The China Link Between Hunter Biden and Corruption in Uganda

Do you hear that sound? It’s the swoosh of air that China’s debt trap makes on its way to slamming shut, this time on Uganda’s international airport nearest its capital city, Kampala.

Uganda’s gradual loss of sovereignty to Beijing has uncomfortable parallels to what the Chinese Communist Party (CCP) apparently attempted to do to America through the “charitable” endeavors of Hunter Biden and family.

Ugandan President Yoweri Museveni, 77, has held onto power since 1986. U.S. President Joe Biden, 79, first announced his plans to run for president in 1987. Both presidents have family members groomed by the same man: Ye Jianming, former chairman of CEFC China Energy Company Limited, linked to Chinese military intelligence, reportedly detained by China in 2018 for corruption, and his company went bankrupt in 2020.

According to the Financial Times in 2018, “A senior Chinese energy executive said Mr Xi [Jinping] has appeared eager to distance himself from CEFC as international attention on the company grew. On multiple occasions, CEFC investments had coincided with Mr Xi’s state visits.”

The family members of both Biden and Museveni are implicated in taking millions of dollars in what is apparently the parallel attempted bribery of powerful global politicians, through CEFC-linked charity and business endeavors with their families. The Hunter and Uganda cases illustrate the influence that a few million Chinese dollars can buy in bankrupting a country and eroding its sovereignty, piece by piece.

Museveni’s government is in the news this week for taking hundreds of millions in loans from China that are impoverishing the country to such an extent, and based on loan agreements with such fundamentally sovereign forms of collateral, that China could gain control of the capital city’s international airport in the coming weeks.

Similar losses could happen to the United States, but on a much larger scale. The Obama administration already signed the United States into horrible deals with Iran and China on nuclear weapons proliferation in 2015, and climate change agreements in 2016 that allowed China, the world’s biggest polluter, to continue to increase pollution into 2030, while the United States and European Union had to immediately reduce. These deals were on Biden’s watch and supported by the vice president.

Uganda’s bad deals are on a smaller scale, but illustrate the same problem. Museveni’s government took a $200 million loan from China in 2015 to pay Chinese companies to expand Entebbe International Airport. The airport is just 20 miles from the capital city.

Within the loan agreement are toxic clauses that surrender financial and operational control of the airport to China, and require any arbitration to be conducted in a Beijing court.

A high-level delegation of Ugandan officials recently went, hat in hand, to Beijing to beg for their sovereignty, or at least, for the sovereignty of their main airport. The CCP summarily refused to renegotiate the collateral obligations.

The Uganda story, which Yasiin Mugerwa of The Monitor originally covered on Nov. 25, has gone viral in Africa. It fits the warnings of many China analysts against doing deals with the CCP, which is a malign actor that takes advantage of corruption to ink agreements that are not in the interests of the impoverished countries that get hitched by leaders who are wined, dined, and capitalized at their citizens’ long-term expense.

The 2015 airport agreement occurred in the context of the grooming and high-level corruption of Ugandan officials by a Chinese energy company and the U.S. nonprofit organization that it funded.

Uganda’s foreign minister since 2005, Sam Kutesa, was elected as president of the United Nations General Assembly (UNGA) in June 2014. At the UNGA meeting in September 2014, Kutesa met with Patrick Ho, the former head of an organization backed by a Chinese energy conglomerate.

Ho met with and cultivated Kutesa, according to the U.S. Department of Justice (DOJ), discussing a “strategic partnership” between CEFC China Energy and Uganda that would include business ventures to be inked when Kutesa returned to Kampala.

Kutesa, a relative of President Museveni, resumed his position of foreign minister after finishing at the U.N. Around February 2016, Kutesa solicited money from Ho, supposedly for a charitable foundation that Kutesa would launch.

A parallel and link to the Hunter Biden story is here, as we shall see.

Ho agreed to provide the requested money, but apparently only in exchange for some favors extended to CEFC China Energy, which included “an invitation to Museveni’s inauguration, business meetings with Museveni and other high-level Ugandan officials, and a list of specific business projects in Uganda in which CEFC China could participate,” according to the DOJ.

In May 2016, according to the DOJ, Ho caused a U.S. charity he led—called China Energy Fund Committee (CEFC NGO), funded by CEFC China Energy and which held “Special Consultative Status” at the U.N. Economic and Social Council—to wire $500,000 to an account provided by Kutesa, supposedly in the name of a charitable “foundation.” Ho advised his boss, the then-chairman of CEFC China Energy, Ye Jianming, to give $500,000 cash to Museveni as a campaign donation, though Museveni was already elected.

“HO intended these payments to influence Kutesa and Museveni to use their official power to steer business advantages to CEFC China,” according to the DOJ.

Sure enough, Ho and CEFC China executives managed to attend Museveni’s presidential inauguration and got meetings with Museveni and his top officials.

“In exchange for the bribes offered and paid by HO, Kutesa thereafter steered a bank acquisition opportunity to CEFC China,” according to the DOJ, which was “an initial step before pursuing additional ventures in Uganda.”

Profits would be shared with the Museveni and Kutesa families.

This is the same Ye Jianming, called the “Belt and Road Billionaire” by CNN, who Hunter Biden corresponded with in 2017. According to a forthcoming book by Miranda Devine that was excerpted by the New York Post on Nov. 28, a Biden family associate named James Gilliar, who knew Ye Jianming from Ye’s time trying to corrupt leaders in the Czech Republic, described CEFC China Energy as having “more money than God,” and as “the capital arm of one belt one road.” He knew CEFC China Energy was “intelligence so they understand the value added” of the Biden brand.

According to Devine, Hunter met Ye privately in February 2017, where CEFC China Energy Chairman Ye “made an offer too good to refuse: $10 million a year, for a minimum of three years, for ‘introductions alone,’ as Hunter would later assert in an imperious email to CEFC executives.” The deal was sealed by the gift of an $80,000 diamond of 3.16 carats to Hunter by Ye.

Hunter explained the trip to meet Ye to the press as for charitable purposes in order to secure donations to World Food Program USA, on the board of which he served. But the Hunter family “proxy,” Rob Walker, was in town along with Hunter to do business with Ye as well.

Three days after the meeting, a CEFC China-linked company wired $3 million into Rob Walker’s account, followed by another $3 million in March. Starting by at least June 2017, Walker in turn made “regular payments” to Hunter and his firms of up to, in one case, $511,000.

Also in June, Hunter extended “best wishes from the entire Biden family” to Ye, according to reporting by Fox News, and then urged Ye to “quickly” wire $10 million to “properly fund and operate” a Biden joint venture with the company. He updated Ye about the establishment of SinoHawk Holdings, a Biden joint venture with CEFC China Energy, and said he would introduce Tony Bobulinski, an international investor courted by Biden family associates.

“I am sure you have been well briefed by our dear friend Director Zang on the political and economic connections we have established in countries where you are interested in expanding during the coming months and years,” Hunter wrote in his letter to Ye.

Joe Biden’s brother, Jim Biden, was apparently also involved in attempting to facilitate the $10 million transfer. The transfer was not completed, but in August 2017, CEFC China Energy wired almost $5 million to the bank account of Hudson West III, a company opened by Hunter and Chinese associates.

Hunter requested keys for his “office mates,” Joe Biden, Jill Biden, Jim Biden, as well as for Gongwen Dong, who Hunter described as Ye Jianming’s “emissary.” Hunter wanted the office signage to reflect both “The Biden Foundation” and “Hudson West (CEFC US).”

How charitable, like the Uganda “foundation” into which Ho’s CEFC NGO wired $500,000.

The Hunter laptop indicates that 10 percent of proceeds from some of the China deals would be reserved “for the big guy,” referring to Joe Biden, that Hunter was paying Joe’s personal bills, and that the two shared bank accounts and credit cards.

The Post broke the Biden laptop story before the election. “We’ve asked these questions of the administration and it ignores us, knowing that CNN, The Washington Post, The New York Times, et al. have its back and will never press things.”

The Need for Tougher Legislation

We need tougher legislation and enforcement against foreign influence in Washington.

Ho was sentenced to three years in prison for international bribery and money laundering in 2019, but Museveni and Biden are still in office.

Kutesa finally left office in June this year “to concentrate on family and business.”

Hunter is under an investigation by the United States that drags on. According to a Fox source, Hunter is the target of a grand jury investigation that started in 2018 involving fund transfers from “China and other foreign nations.”

It’s good that U.S. officials are investigating foreign influence in our government, but it is far too little, too late, given that a sitting president is involved.

It’s time to more quickly firewall America’s politicians, and their families, from foreign money. Beijing’s influence is too dangerous for the American response to simply be its use as a partisan battering ram for political points.

When the Biden family does business with China, the Republicans use it against him. When a Republican does something similar, the Democrats get the chance to take some whacks. But this mutual punishment never deals with the underlying problem: America’s laws against foreign influence of American politicians are weak, and insufficiently enforced.

We need tougher legislation and law enforcement against politicians of both parties, and their families, who do business with the enemies of America. Nobody is above the law.