The Best Advice Washington Ever Got on US–Japan Defense 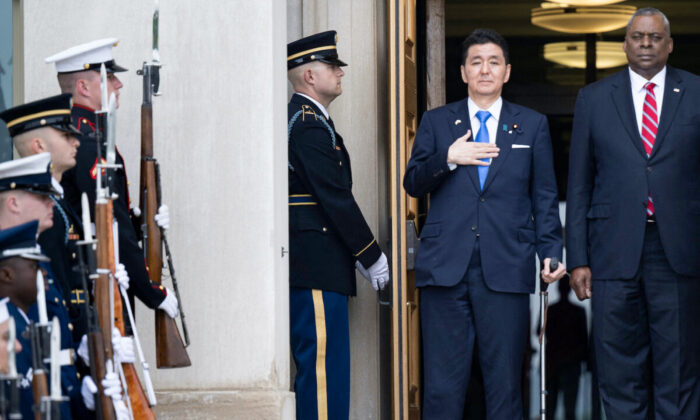 Japan's Defense Minister Nobuo Kishi and U.S. Secretary of Defense Lloyd Austin listen to Japan's national anthem during an honor cordon at the Pentagon in Washington on May 4, 2022. (Brendan Smialowski/AFP via Getty Images)

It’s exhilarating that Japanese leaders are talking about spending much more on defense and improving the nation’s defense capabilities. But they are short on specifics, and with communist China out looking for a fight, it’s dangerous to hope Japan figures things out at its own pace.

The Americans, who shoulder the heaviest load in defending the Indo-Pacific region, need the Japanese to do certain things on the defense and security fronts.

What Does Washington Need?

Put simply, the United States needs a Japan Self Defense Force (JSDF) that can fight a war alongside and inter-linked with U.S. forces.

The U.S. and Japanese militaries have, mostly on their own senior leaders’ initiative, made some progress in the last few years—doing more joint training of a more realistic sort, and much of it in the south, where a war is likely to be fought.

But more is needed, which requires the Japanese government and the civilians who control the JSDF to direct and ensure the necessary improvements.

The late former Prime Minister Shinzo Abe deserves much credit for pushing through revised U.S.–Japan defense cooperation guidelines and reinterpreting “collective self-defense.” These allow Japan to play a bigger role in its defense and be a more useful ally to U.S. forces—if it wants to.

But in terms of concrete improvements to both JSDF capabilities and Japan-U.S. operational capabilities, Abe came up short. His successors have said plenty of the right things—but “outcomes” are lagging.

There doesn’t appear to be any great urgency—despite the now widely recognized threat from the Chinese regime. Keep in mind that the so-called strike capability, which is now a hot topic in Japan, has been under discussion for at least the last 15 years. And building a replacement for the U.S. Marine Corps Air Station Futenma on Okinawa was first promised in 1998. Almost 25 years later, it isn’t close to completion.

One can’t entirely blame the Japanese for not being in a hurry. U.S. alliance managers—civilian and military—have never really pushed things and too often preemptively think up reasons why something or other is “too hard” for the Japanese to do.

However, the U.S. government has more influence on Japan’s defense policies than alliance managers seem to think.

They might usefully recall the advice Japanese leaders offered American officials around 1970 when the Americans wanted to permanently station an aircraft carrier at Yokosuka Naval Base in Japan.

Indeed, this was probably the best advice the United States ever received about dealing with Japan on defense matters. One of the Americans involved explained to this writer what happened. He described it as a three-step process:

Step 1: The U.S. National Security Council decided to homeport a carrier in Japan. But the Tokyo Embassy was hesitant and offered up excuses: “never done in a foreign country before,” “the Liberal Democratic Party (LDP) is not all-powerful,” “need to wait for the right time,” etc.

However, a U.S. Navy lieutenant commander assigned to the Navy’s Japan headquarters at Yokosuka brought his big boss to Tokyo in civilian clothes to meet a senior LDP member of the Diet, who also was a former high-ranking defense official. The lawmaker asked several questions.

He then said: “We hope we are correct that the United States wants and needs the U.S.–Japan Mutual Security Treaty, but Japan’s need is absolutely critical to our security. Thus, when you really want something important, don’t ask our opinion. Tell us what you need very firmly, and don’t back down.”

Step 2: Kakuei Tanaka succeeded Eisaku Sato as prime minister. One evening at a reception for the diplomatic community at the speaker’s official residence, the Diet member asked the U.S. ambassador and the deputy chief of mission to join him in a side room.

The Diet member said that Prime Minister Tanaka was a good man who could be decisive, but he did not have a good background on security issues. The Diet member said he had been teaching Tanaka about the critical importance of the alliance for Japan’s security and telling him that the United States might have a desire to base an aircraft carrier in Yokosuka.

Step 3: Much later, when all went well, including USS Midway’s smooth arrival in Yokosuka in October 1973, the embassy began to take credit for “its” achievement in persuading Japan.

Today’s American “alliance managers” could learn from this, though they also should bear in mind that the Japanese are not mind readers.

If the United States needs something from Japan, it should remember that sound advice from 50 years ago that included: “Tell us what you need very firmly and don’t back down.”

Can the US Speak So Directly to Japan?

Why not? When the prospects of regional conflict are at dangerous levels, and Washington is offering up its servicemen and servicewomen to die on Japan’s behalf, it had better ask directly for what it needs from Japan to deter a war or to win one.

Of course, speak politely as you would to a friend and do it quietly. But be very clear as to what is needed and by when. This is all about self-preservation for both nations. And time is running out.

For the record: The U.S. Navy lieutenant commander who set things in motion was James Auer, a former minesweeper skipper. He later served as the U.S. Department of Defense director of Japan affairs and as a professor at Vanderbilt University for many years. He remains one of the most respected people involved in U.S.–Japan affairs.

Grant Newsham
Grant Newsham is a retired U.S. Marine officer and a former U.S. diplomat and business executive with many years in the Asia/Pacific region. He is a director at One Korea Network and a senior fellow with the Center for Security Policy and the Yorktown Institute.