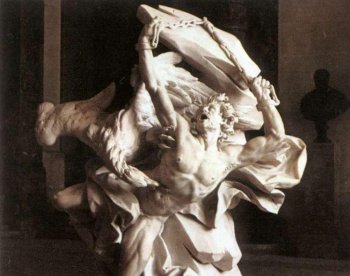 The Battle of the Titans

By Tsiakou Panagiota
Print
Ancient Greek mysteries were rituals in which only some selected ones took part. Only the ones who had participated would know what they were about. Anyone involved had to be silent and was not allowed to speak about them.

According to ancient Greek mythology, the goal of participating in the mysteries was to purify and transcend oneself in order not to be burned by the light of the celestine/divine when facing it.

While mysteries purified Greeks through acceptance of the divine, there were myths that described how a being would be burned by the divine when insulting the divine. One of these myths is the myth of the Titans. It is one of the first myths in Greek mythology.

The Myth of Prometheus

In primordial times, when heaven and earth were a couple, they gave birth to the seven Titans. The Titans were the ancestors and protectors of the human beings.

One day, Prometheus, the son of one of the Titans, stole the fire from the Gods. According to the mythology, fire had three levels: the universal fire, the electric fire, and the fire of the hardships.

Although Prometheus couldn’t take the universal fire, he managed to steal the fire of the hardships to give warmth to his beloved humans. According to the mythology, humans didn’t have sickness, misery, pain, and the like before Prometheus brought the fire.

When Zeus, the king of the Gods, saw that Prometheus had disrespected the Gods by stealing the fire from them, he decided that retribution should be given to Prometheus in order to compensate for his action.

Therefore, Zeus created Pandora, a beautiful woman, out of clay. (Till then, women didn’t exist; so all women originate from her.) Zeus sent Pandora to one of Prometheus’s brothers, Epimetheus.

Prometheus had told his brother in the past to never accept gifts from Zeus, but Epimetheus didn’t listen to Prometheus. As Pandora was so beautiful, he accepted her.

Pandora was carrying with her a box that contained all the human miseries never before suffered and all kinds of sentiments and desires. When Pandora opened the box, all miseries, sentiments, and desires contained inside the box overwhelmed humankind—the only thing remaining in the box was hope.

The Titans were defeated by Gods after 10 years of war. Prometheus and all his brothers had to compensate for their insults, each in his own way.

Prometheus was chained to a rock, with an eagle eating his liver every day. His brother Menoetius had cursed the Gods and was therefore eliminated by Zeus’s lightning. Their brother Atlas, the leading Titan warrior in the battle between the Titans and the Gods, was punished to hold the sphere of the sky on his neck and shoulders.