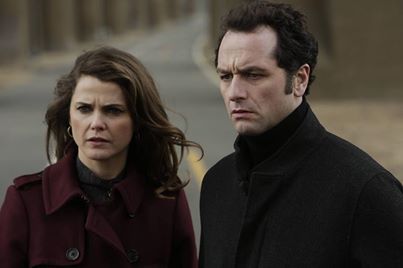 The Americans on FX has been renewed for a season 3.

The popular spy show is wrapping up season 2 on May 21.

The finale will include Elizabeth rushing to exfiltrate Jared with Larry closing in while Philip readies Fred for a crucial mission. And Arkady finally plays his hand, forcing Stan to make an impossible choice.

FX producers are pleased with the program.

“The Americans continues to be one of the best shows on television,” said Eric Schrier, president of original programming for FX Networks, in a statement. “Fans will be blown away by the rest of this season, and we can’t wait to see what they come up with next year.”

“Seriously, if the Soviet Union had this level of support from its allies, the Cold War might have turned out differently,” executive producer Joe Weisberg added.

A premiere date hasn’t been announced yet but based on the previous premieres, it will likely premiere sometime in late January or late February. If it stays on Wednesday nights, then that could be January 28 or February 25.

Meanwhile, Keri Russell (Elizabeth) told Zap2It about what she’d like to see in series 3.

“My favorite is when it’s concentrated on the relationship and it’s really a metaphor for marriage. That’s my favorite way,” she said.

“I love the spy stuff, I love the way it raises the stakes and complicates the weird relationship, but I like the marriage stuff.”