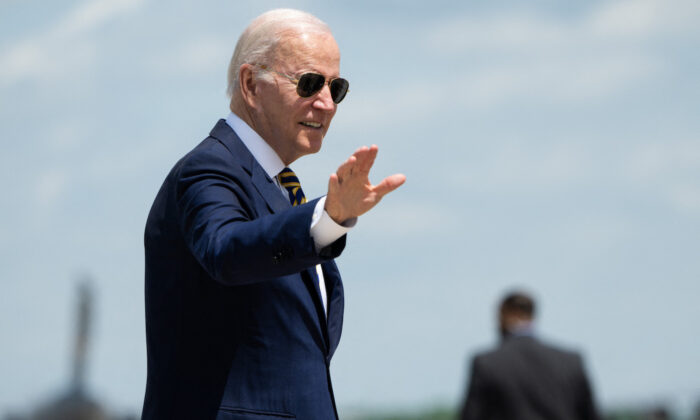 U.S. President Joe Biden arrives to board Air Force One prior to departure from Joint Base Andrews in Maryland, May 19, 2022, as he travels to South Korea and Japan, on his first trip to Asia as president. (Saul Loeb/AFP via Getty Images)
Executive Branch

Biden Has Not Given a Media Interview in 100 Days

On Friday, President Joe Biden reached a unique milestone by not conducting a sit-down interview with any media outlet for 100 consecutive days.

The last time Biden participated in a sit-down with the press was when NBC news anchor Lester Holt talked to him on Feb. 10. Though the president has held several press conferences and responded to questions from interviewers, he has not done any extensive interviews since then.

“One hundred days without a press interview underscores how little Biden cares to answer for struggling Americans seeking solutions to the crises he created,” Republican National Committee spokeswoman Emma Vaughn said, reported the Washington Examiner. “This milestone is yet another pitiful mark on Biden’s long list of failures.”

Biden has given four interviews since Feb. 10, with none being sit-down interviews with professional reporters. This includes two podcasts the president taped in February, remarks he gave to TV anchors during a traditional off-the-record lunch ahead of his first State of Union address, and the final one being a two-word reply to a CNN reporter on March 18.

“100 days since the Big Guy sat down with a reporter. What do you think Biden is more afraid of talking about: His failed record on any given topic, or his obvious involvement in his son’s shady business dealings?” Tommy Hicks, the co-chair of the Republican National Committee, said in a May 21 tweet.

Since taking office in January last year, Biden has only conducted 23 interviews, which is the lowest among the past seven American presidents. While Donald Trump had given 95 interviews by this time, Barack Obama gave 187 interviews, George W. Bush 60, Bill Clinton 64, George H. W. Bush 70, and Ronald Reagan 78 interviews, data from the White House Transition Project shows (pdf).

Interestingly, Reagan, who was shot in the lung during his first year in office, gave more interviews than Biden. Reagan had given his first interview post the attack in less than a month.

Biden has often been accused of being in mental decline. He is the oldest president of the United States and will turn 80 this year. Some Biden supporters believe that his staff is overprotecting him as they are worried the president’s distracting actions might have significant domestic and international consequences, reported the New York Post.

The White House has been pre-screening journalists who are allowed near Biden at events that take place in the East Room and the Eisenhower Executive Office Building. Such restrictions were never in place during the time of previous administrations.

When Biden was trying to respond to a journalist’s question about Afghanistan last month, the director of message planning, Meghan Hay, interrupted the attempt by dressing up as an Easter Bunny and waving her arms to attract the president’s attention.