The American Oligarchy Is Being Exposed 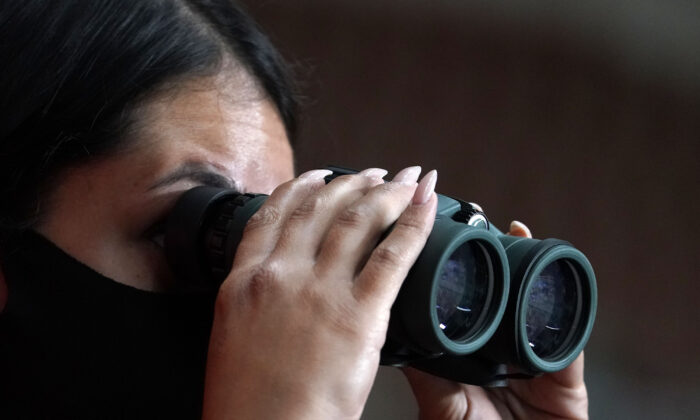 A reporter watches the Maricopa County ballots cast in the 2020 general election being examined and recounted by contractors working for Florida-based company, Cyber Ninjas, who was hired by the Arizona Senate at Veterans Memorial Coliseum in Phoenix, Ariz., on April 29, 2021. (Rob Schumacher/The Arizona Republic via AP/Pool)

Although Donald Trump has made few public appearances since leaving the White House on Jan. 20, he has made his presence felt in other ways.

One of the biggest impacts that Trump has had on the country both as president and as a private citizen has been awakening millions of Americans to the very real danger of a media and political elite class that has been subverting Constitutional and legal processes in the states to increase their own power and control.

This is especially true of America’s election systems.

For the past six months, more Americans than ever have been made aware of the existence of this powerful network of incredibly rich and privileged people that we could call an “oligarchy,” as James O’Keefe does in his recent music video.

An oligarchy is defined by Britannica as being “government by the few, especially despotic power exercised by a small and privileged group for corrupt or selfish purposes. Oligarchies in which members of the ruling group are wealthy or exercise their power through their wealth are known as plutocracies.”

This present oligarchy has recently been forced from behind the curtains and into the open as it began clumsily and incompetently seeking to control the national dialogue on a variety of subjects, even as the role it played in the 2020 elections was uncovered. The more it fought to censor what Americans could say, the more the oligarchy exposed itself.

In this column, I’m going to cover three specific attempts by this oligarchy to control the national dialogue preceding, during, and following the 2020 election.

The first attempt at blatant and open censorship of what the public could talk about and see involved the Hunter Biden laptop scandal. The New York Post published an explosive report about the contents of the younger Biden’s allegedly abandoned laptop, which led to the revelation that the FBI was investigating.

As a counter to those facts, a narrative based on no evidence was quickly launched and relentlessly pushed in the mainstream media that the laptop scandal was a Russian disinformation operation.

Candidate Joe Biden himself spent the remainder of the campaign dismissing questions about the laptop by calling it Russian disinformation.

Now the Russian disinformation narrative has been exposed as not only being a lie but also a coordinated media coverup—created to get Biden past the election without having to answer hard questions.

The second attempt sought to prevent any national discussion of election irregularities by engaging in a truly massive campaign of censorship. Twitter alone seems to have permanently banned millions of its users for supposedly spreading “election disinformation.”

Facebook and YouTube have also regularly censored content regarding the controversial election. I’ve been warned more than once during a regular Sunday night livestream I participate in on YouTube to watch what I say regarding the 2020 election, to keep the video service from taking the video offline.

The third attempt was when the oligarchy tried to launch a false narrative about a supposed “armed” insurrection at the Capitol building in Washington on Jan. 6.

Just about everything that was claimed to have happened that day has turned out to be a lie. This insurrection narrative was begun to provide justification for an absurd second impeachment of a president who had already left office.

As I stated in a previous column, there has never been such a thing as an unarmed insurrection in American history.

Yet another narrative that was quickly launched despite no evidence was the claim that Capitol Police officer Brian Sicknick died because of injuries suffered during the Capitol breach. In fact, Sicknick died of a stroke unrelated to anything that happened on Jan. 6.

Yet, for weeks, the mainstream press regaled the American public with lurid stories that claimed Sicknick was struck in the head by a fire extinguisher wielded by a Trump supporter. In a video showing the alleged incident, the red object thrown by the rioter appears to bounce off an officer’s helmet. There was never any confirmation that the officer struck was Sicknick. But that didn’t matter. The media had their narrative, and they ran with it enthusiastically for weeks.

And when the truth emerged about the real cause of Sicknick’s death, the press quietly moved on. There were no real public recriminations or any apologies over this journalistic malpractice.

The modern American news media creates narratives to drive political outcomes, nothing more. This is just another clear example of it.

Freedom Versus Control Has Never Been More Clear

Nobody elected Mark Zuckerberg of Facebook, Jack Dorsey of Twitter, Sundar Pichai of Google, or any other social media technocrat to police the nation’s dialogue about politics—or anything else. They are self-appointed gatekeepers, nothing more than that.

Nobody elected Marc Elias or the horde of lawyers working for Perkins Coie to run around in certain states before the 2020 election to litigate extensive changes to election laws that bypassed state legislatures in a most unconstitutional fashion. Rich and privileged people paid them to do that.

There’s a big difference between a national dialogue that’s organic and rises up from the people of these United States, and Marxist/progressive political narratives that are being forced onto the public from the top down by those who control much of the nation’s electronic discourse.

When you refuse to let organic national conversations rise and insist on controlling with an iron fist what people can talk about publicly while you attempt to force-feed them your own handpicked political narratives, you’ve gone far beyond being a mere censor.

The Stakes Couldn’t Be Higher

The shadow “cabal” used a Time magazine article to try to recast themselves as selfless public servants on a noble quest to “fortify” the 2020 presidential election against Donald Trump, which turned out to be far more revealing than they perhaps intended.

The main claim of the article ended up being that they had to rig the election against Trump to save the election.

If these oligarchs have their way, the outcome of every future election will be predetermined by their army of lawyers and their creation of a clearly unconstitutional “election week.” How long before Americans must endure an “election month,” where it takes weeks to get to the “right” outcome the powerful have already decided on?

I already see a huge backlash building against this oligarchy. It will take some time for Americans to get the audits done, get the court victories, and build their own alternatives to bypass these arrogant digital gatekeepers. But now that the oligarchy has been forced out into the open, American patriots can begin working together to counter its power over this country.