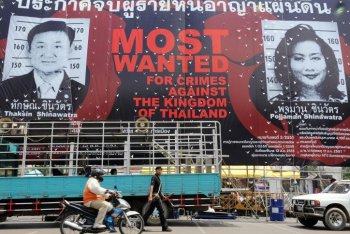 An anti-government poster depicting former Thai prime minister Thaksin Shinawatra and his wife Pojjaman in front of the United Nations office near Government House in Bangkok. The Thai government is seeking the extradition of former the Thai prime minister. (Saeed Khan/Getty Images)
World

By Jasper Fakkert
Print
The Thai government is seeking the extradition of former Thai prime minister, Thaksin Shinawatra, on terrorism charges. An arrest warrant was approved by a Thai criminal court on Tuesday.

Thaksin is accused of being the mastermind behind the violent protests that held Thailand's capital, Bangkok, in its grip for the last two months. Eighty-eight people were killed as a result of the protests.

Thaksin has already been convicted and sentenced to a two-year prison sentence for a conflict of interest involving his commercial businesses. Thaksin now spends most of his time in Dubai and is believed to have recently been issued a passport by Montenegro.

The current prime minister, Abhisit Vejjajiva, says that Thaksin being wanted on terrorism charges will make it easier for him to be extradited to Thailand.

Thaksin has a large following from the rural poor in Thailand. He made himself popular by taking measures to help the country's poor and stirring up a sense of injustice among them.