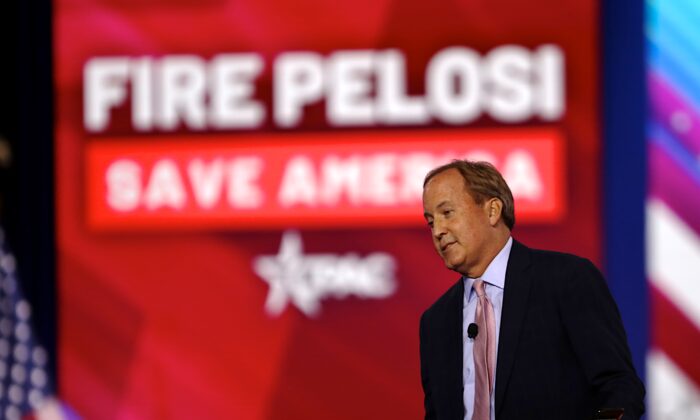 Texas could go the way of Georgia if the state’s election integrity laws are not vigorously defended.

That’s according to Attorney General Ken Paxton who gave insight into Texas’ fight to stop Democrat-controlled counties from sidestepping election law during the pandemic and the ongoing defense of election integrity laws.

Paxton, up for reelection, spoke at the Conservative Political Action Conference in Dallas last week. He said the state defended 12 election lawsuits filed against it during 2020.

“It became very clear this was an orchestrated effort somewhere outside the state by somebody who had a lot of money, but we didn’t know who,” he said.

“It was designed to make sure that mail-in ballots were mailed out to as many people as possible in violation of Texas law,” he continued.

Election officials in highly populated counties such as Bexar, Travis, and Harris were attempting to mail out ballots, which would have reached 5 million people or more, Paxton said.

Texas’ absentee ballot laws limit those who are qualified to apply.

In 2020—before the legislature tightened identification requirements—a citizen had to sign up and provide a signature, which was matched against a signature on the returned mail-in ballot.

So if millions of ballots had gone out in 2020, it would have been impossible for Texas to verify signatures because most of those people would not have had a signature on file, Paxton said.

To put it in perspective, former president Donald Trump won Texas with 52 percent of the vote to President Joe Biden’s 46.5 percent in 2020. Just over 630,000 votes separated the two.

Paxton said if Texas had not fought the lawsuits and won, the state’s electoral votes could have ended up in Biden’s column.

He pointed to Georgia as an example of what can happen when state election laws are changed through administrators.

Georgia’s secretary of state allowed election changes, such as unmanned drop boxes in 2020 through a consent decree with the Democratic Party of Georgia. Trump lost Georgia by some 12,000 votes in 2020.

In 2016 before the drop boxes and other changes, Trump won 51 percent of the vote to Hillary Clinton’s 45.6 percent in Georgia. Those percentages are strikingly similar to Texas percentages in 2020.

Paxton recalled that all the battleground states stopped counting on election night for the first time he could remember. States where Trump was up by hundreds of thousands of votes that night, went to Biden after days of counting.

“We’re not supposed to notice that’s unusual,” he said. “We’re supposed to accept that’s just perfectly normal. I knew right then what was going on.”

Democrats, however, have denounced any notion of widespread voter fraud during the 2020 election as Trump’s big lie.

They have attacked Republicans for tightening election laws, saying they are targeting minorities.

Even with the 2020 victories, Paxton said Texas remains at risk due to a ruling by the Texas Court of Criminal Appeals, which is the highest criminal court in the state.

The Attorney General’s Office prosecuted Sheriff Zena Collins Stephens on a campaign finance and records tampering indictment after Texas Rangers investigated. The case was eventually appealed to the Texas Court of Criminal Appeals.

“Then suddenly, out of the blue, our Texas Court of Criminal Appeals struck down these statutes,” Paxton said. “This was two days after the filing deadline for anyone to run against them.”

That means it will be up to Soros-backed DAs to prosecute election fraud unless the Texas Legislature passes a law in 2023 allowing the state’s attorney general to prosecute such cases.

The court ruled 8 to 1 in December 2021 that the Texas attorney general’s authority to unilaterally prosecute election law crimes violated the separation of powers clause in the Texas Constitution.

Senator Paul Bettencourt (R-Houston) led a group of 14 Republican state senators who filed a friend-of-the-court brief in January urging the Criminal Court of Appeals to reconsider their opinion.

Bettencourt told The Epoch Times that the court has yet to respond to the request by the senators, but they will “absolutely” file new legislation if needed to protect election integrity.

“It takes the prosecutorial bat out of everything,” Bettencourt said of the court’s opinion.