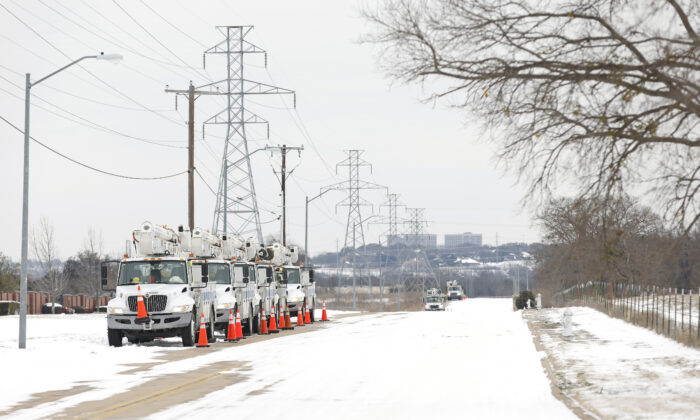 Pike Electric service trucks line up after a snowstorm in Fort Worth, Texas, on Feb. 16, 2021. (Ron Jenkins/Getty Images)
US News

When Old Man Winter hit Texas with a rare week of snow, ice, and subfreezing temperatures, the state’s energy industry reeled as power sources of all kinds froze, leaving millions of Texans shivering.

Such a crisis isn’t supposed to happen in Texas, the oil and gas capital of the United States, where so much fossil fuel is produced it’s exported, and where investors have pumped billions of dollars into clean power generation to take advantage of the state’s usually sunny skies and vast windy open spaces.

Power crews came in from other states, working around the clock to get power restored to freezing families from Houston on the Gulf Coast to Amarillo in the Panhandle. It was so cold that at one point, half of the state’s 10,700 wind turbines were frozen.

By the morning of Feb. 17, the Electric Reliability Council of Texas (ERCOT), which manages the state’s power grid, said service was being restored to 600,000 residents, but that left 2.7 million still in the cold.

ERCOT is a 501(C)(4) nonprofit foundation that “manages the flow of electric power to more than 26 million Texas customers, representing about 90 percent of the state’s electric load.”

The foundation answers to the Public Utilities Commission of Texas and the state legislature, not to the federal government. That makes Texas the only state that has its own power grid independent of Washington, D.C.

The charges and counter-charges were already flying between oil and gas industry advocates and those representing clean energy interests, especially for wind and solar before ERCOT’s announcement.

“This shows how the Green New Deal would be a deadly deal for the United States of America,” Abbott told Fox News host Sean Hannity on Feb. 16.

“Our wind and our solar got shut down, and they were collectively more than 10 percent of our power grid. That thrust Texas into a situation where it was lacking power on a statewide basis,” Abbott told Hannity.

“As a result, it just shows that fossil fuel is necessary for the state of Texas and other states to make sure we will be able to heat our homes in the wintertime and cool our homes in the summer.”

For his part, Perry said in a Fox News interview that “if this Green New Deal goes forward the way that the Biden administration appears to want it to, then we’ll have more events like we’ve had in Texas all across the country.”

The American Clean Power Association (ACPA) responded with a blistering attack on its critics:

“It is disgraceful to see the longtime antagonists of clean power—who attack it whether it is raining, snowing, or the sun is shining—engaging in a politically opportunistic charade misleading Americans to promote an agenda that has nothing to do with restoring power to Texas communities,” ACPA Chief Executive Heather Zichal said.

“Texas is a warm-weather state experiencing once-in-a-generation cold weather. Most of the power that went offline was gas, coal, or oil. It is an extreme weather problem, not a clean power problem,” she said.

“If anything, it shows why we need to be investing in building out more renewable energy sources with better transmission and storage to replace outdated systems. While some try to distract from their own failure and point fingers to slow the transition to a clean energy future, America’s renewable energy companies are working around the clock to put additional power onto the system to assist Texans during this difficult time.

“Enough political games. Don’t mess with Texas, just tell the truth, and get the power back on for people.”

In truth, facts were found on both sides, as Crenshaw made clear in a series of tweets in which he pointed to failures from one end of the Texas power system to the other.

The state, for example, has four nuclear power plants. One near Houston shut down when a safety sensor froze, Crenshaw said.

Most of the state’s power plants run on natural gas or coal, and they were all online until a supply problem and a design problem appeared, the Texas congressman said.

“ERCOT planned on 67GW [gigawatts] from natural gas/coal, but could only get 43GW of it online. We didn’t run out of natural gas, but we ran out of the ability to get natural gas. Pipelines in Texas don’t use cold insulation—so things were freezing,” Crenshaw said in a tweet.

“Bottom line: Thank God for baseload energy made up of fossil fuels,” he wrote. “Had our grid been more reliant on the wind turbines that froze, the outages would have been much worse.”

Wind turbines can function in extreme cold, but the hundreds of them that have dotted the West Texas landscape in the past decade were designed for the local climate, which almost never experiences the kind of severe cold seen this week.

Abbott has called for the state legislature to investigate ERCOT’s role in the crisis.

Dan Kish, a distinguished senior fellow with the Institute for Energy Research (IER), told The Epoch Times on Feb. 17 that “there’s a lot of CYA going on right now. And the truth is we just don’t know exactly what happened because the numbers aren’t all in yet. But, clearly, we lost some production on the fossil energy side and the rest due to the cold.”

But Kish claimed there’s a fundamental difference between the problems that interfered with Texas power plants burning fossil fuels and those generating power through wind and solar.

“The way renewable energy works is it’s inherently intermittent, and therefore, it’s all like a luxury in essence,” Kish said, “except for the people that own it and the people that have to pay for it.

“That’s because you’re taking a perfectly good system that can respond by ramping up and down, typically, to demand, and casting that aside and putting in this stuff that produces energy when it feels like it.”

Despite its longstanding reputation as the heart of the oil and gas industry, Texas’s reliance on wind energy has increased in the past decade to 23 percent of the state’s total electricity generation.

In fact, as the Texas Tribune noted in 2010, Texas has long produced more wind energy than any other state. But it’s one thing to generate power with windmills and solar panels, it’s another to move the power across vast distances to where it’s needed.

It was Perry, when he occupied the governor’s office in Austin, who went along with a $5 billion program to erect transmission lines to move the power from the West Texas windmills and solar panel farms to the big cities across the state.

And before Perry, Kish noted, an early booster of the Texas clean energy industry was former Enron CEO Ken Lay, who invested heavily in the nascent power resource after then-Texas Gov. George W. Bush helped persuade Congress to renew a critical federal tax credit in 1998. Bush’s father had signed the legislation that created the tax credit in 1992.

DeVore said, “Texas has seen a growth of 20,000 megawatts of wind and solar over the same period [the past four to five years] to a total of 34,000 megawatts of installed capacity statewide, though they rarely perform anywhere close to capacity.

“Wind and solar, with state and federal subsidies, have pushed reliable thermal operators out of business or prevented a new generation from being built as operators can’t make money off of the market.”