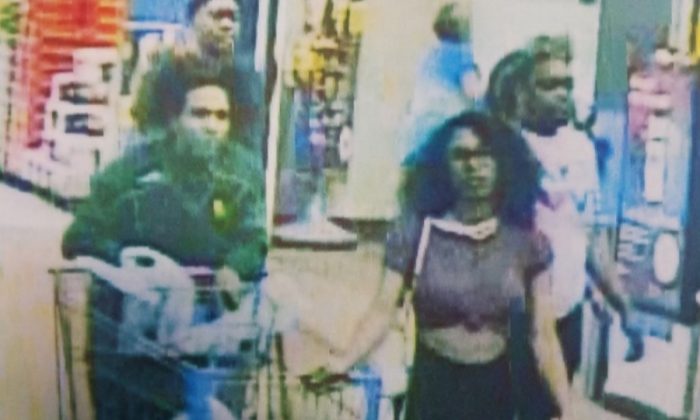 Picture of the suspect released by the police as she entered into the Walmart store where the food tempering took place. (Lufkin Police and Fire)
US News

A Texas Walmart has an employee standing guard to protect its Blue Bell ice cream, after a woman was spotted grabbing a tub and licking it before putting it back in the freezer, in a viral video last week.

The Walmart in Corpus Christi announced the surprising news in a Facebook post, saying that the store has asked an “armed” guard named Ruben to watch over the ice cream, according to ABC 13.

Ruben is apparently a member of the store’s staff, and he was only holding a water gun.

“We’re guarding our Blue Bell ice cream for your weekend party,” the store said in the social media post, which later appeared to be removed.

Since the June 28 incident, police say they believe they have identified the young woman who was filmed licking the top of the Blue Bell ice cream tub, then laughing before she put it back on the shelf.

Lufkin, Texas police said on July 5 they believed the suspect has been identified, after “detectives had obtained surveillance video placing a woman matching the suspect description in the Lufkin [Walmart] on June 28 around 11 p.m,” reported NBC News.

Police said the suspect, who is under 17, admitted to licking the ice cream in the Lufkin store. However, because she’s a minor, she will not be identified.

The police department had said in a statement on July 3 that the offender could face a second-degree felony charge of tampering with a consumer product. This meant facing fines of up to $10,000 and a prison term of two to 20 years, according to the Texas state penal code.

Police, who continued the investigation throughout the Fourth of July holiday, also identified the individual who recorded the now-viral footage, who can be heard chanting, “lick it, lick it,” in the background, before adding, “Oh, you foul. Put it back, put it back.”

“We have spoken with her boyfriend, who is an adult, as well. They were both forthcoming with what occurred and admitted to the act,” the police said in an update.

“We do not intend to pursue charges against her as an “adult” and therefore what happens from here is at the discretion of the juvenile justice system,” continued the police statement. “As to whether her boyfriend will face charges, we are currently discussing his involvement with prosecutors.”

Be one smart cookie and try our new Cookie Cake Ice Cream! Cookie Cake is a sweet cream ice cream loaded w/chocolate chip cookie cake pieces and swirls of chocolate and vanilla icing. In stores beginning today in the half gallon and pint sizes, but only for a limited time! pic.twitter.com/6EE8QnVnyJ

The incident has been described as a “malicious act of food tampering,” by Blue Bell Creameries, which manufactured the tub of ice cream licked by the woman.

“Our staff recognized the location in the video, and we inspected the freezer case,” it said in a statement on July 1.

“Based on security footage, the location and the inspection of the carton, we believe we may have recovered the half gallon that was tampered with. Out of an abundance of caution, we have also removed all Tin Roof half gallons from that location.”

“The safety of our ice cream is our highest priority, and we work hard to maintain the highest level of confidence of our customers,” Blue Bell Creameries continued in the statement.

“Food tampering is not a joke, and we will not tolerate tampering with our products.”

According to NBC News, the company said earlier in a statement that the way the ice cream tubs are produced would make it evident to consumers if a fresh tub had been compromised.

As the investigation is still underway, there is a possibility of further charges being issued in connection with the incident, and investigators are in touch with the FDA.