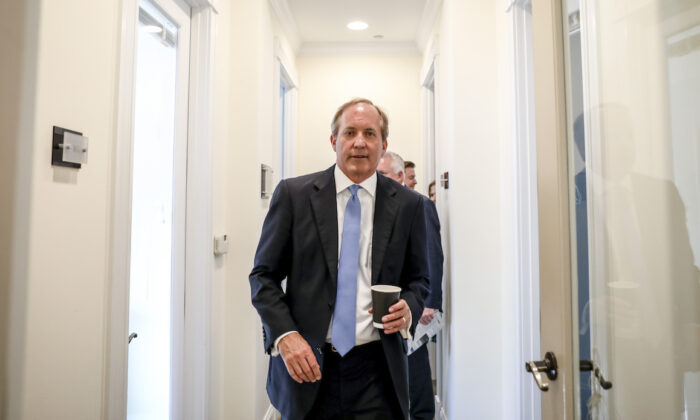 Texas Attorney General Ken Paxton has vowed to use all available legal means to rein in President Joe Biden’s policy plans and ensure that his administration adheres to the rule of law.

The Lone Star State’s top law enforcement official wrote in an op-ed that it’s the responsibility of individual states to provide the necessary checks and balances against the executive branch, given that both chambers of Congress are currently controlled by Democrats with their slim majority.

“I am proud to lead the way for Texas in providing the necessary counterweight to the far-left Democrats forcing dangerously radical policies upon us,” Paxton wrote in the op-ed published on Fox News on March 13.

Paxton, who has served as the state’s attorney general since 2015, has been at the forefront in defending constitutional rights, election integrity, and has stood as a bulwark against leftist progressive policies that he says harm his state.

One such policy area that Paxton has paid close attention to is immigration.

Shortly after Biden took office, Paxton took the new administration to court over one of President Joe Biden’s executive orders that halted the deportation of certain immigrants for 100 days. After filing the lawsuit, a federal judge in Texas temporarily blocked the executive order. The judge’s suspension of the executive order has now been extended indefinitely as the case continues to play out in court.

Paxton’s office had argued that the Biden administration had “ignored basic constitutional principles and violated its written pledge to work cooperatively with the State of Texas” when it issued the order on halting deportations.

“This was a major win for the rule of law, national security, and the safety of Texas citizens. And we won’t stop there,” Paxton wrote in his op-ed.

He also underscored that several of Biden’s actions have led to detrimental results for Texans, such as the elimination of thousands of U.S. jobs following the revocation of the Keystone XL Pipeline permit.

If Biden’s other plans come to fruition, it could further violate other individual liberties and constitutional rights, such as second amendment rights, he said.

“If those threats become a reality, Texas will once again step to the forefront to defend the individual liberties of its citizens against the massive power grab by the Biden-led federal government,” Paxton said.

Paxton’s op-ed signals that Biden is likely to face more challenges from the Lone Star State and possibly other Republican-led states. During former President Donald Trump’s presidency, Democrat-led states filed 126 lawsuits against his administration, according to a litigation tracker maintained by Dr. Paul Nolette, associate professor of political science at Marquette University.

So far, the Biden administration is facing four lawsuits filed by states. However, three of those lawsuits are filed against Trump-era regulations.

Paxton argued that while the Democrats’ state lawsuits against Trump sought to “prevent the Trump administration from enforcing the rule of law,” his lawsuits intend to “force the Biden administration to adhere to the rule of law and will seek to block any executive action or legislation that does not do so.”

“It is now up to the states to save this country from President Biden’s liberal and illegal wish list and the Office of the Attorney General of Texas stands ready to lead in that mission,” he said.