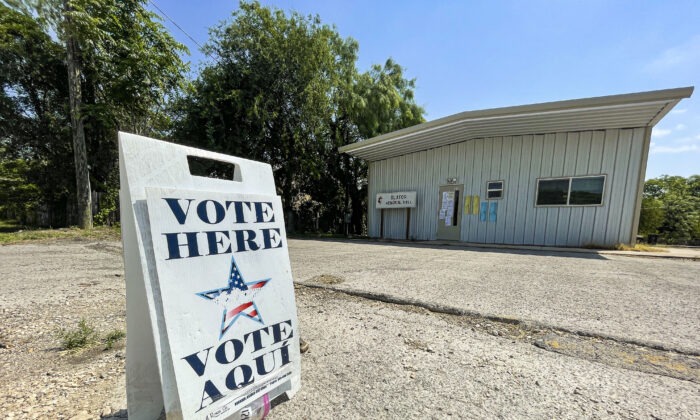 An early voting location for the primary runoff elections in Brackettville, Texas, on May 18, 2022. (Charlotte Cuthbertson/The Epoch Times)
By Katabella Roberts

The Texas Supreme Court ruled on Tuesday that Harris County should include over 2,000 votes that were cast during an extended one-hour period of voting on Election Day in its certified election results.

The court also ordered the county to determine whether the votes cast later would affect the outcome of any races.

In a temporary order (pdf), the court ordered Harris County, the most populous county in Texas, must count ballots as required under Texas law and to “separately identify in the vote tabulations the number of ‘later cast votes’ for each candidate in each race and for or against each proposition.”

This, the court said, is “so that candidates, the parties, and this Court may ascertain whether the ‘later cast votes’ would be outcome-determinative and so that the parties can assess the extent to which further litigation is warranted.”

“Respondents are ordered to provide the Court with a copy of the canvass results, including the separately tabulated ‘later cast votes,’ as soon as they are available,” the order reads.

Approximately 2,073 votes were cast during the extended voting period on Election Day under which polls were open past 7 p.m.

Texas state law states that polls shall be opened at 7 a.m. for voting and closed at 7 p.m.

The decision to keep the polls open longer came after a group called the Texas Organizing Project, along with the Texas Civil Rights Project and the American Civil Liberties Union of Texas, asked a district court judge to do so, alleging that dozens of polling stations across the county had opened late that morning.

Tuesday’s ruling came after Texas Attorney General Ken Paxton, a Republican, had submitted an emergency request asking the court to prohibit the ballots cast during the extension period in the midterm elections from being counted.

Paxton’s petition (pdf), which names the Harris County Commissioners Court, Harris County judge, and county elections administrator as respondents, was filed just one day before the election results were set to be certified.

In it, Paxton claimed that the ballots cast during the one-hour-long polling hours extension violated Texas law.

Paxton also pointed to elections in Harris County being plagued with multiple issues, including paper ballot shortages, and technical issues.

“A trial court’s last-minute intervention only made matters worse,” Paxton wrote. “Three hours before the close of the polls in Harris County, the Texas Organizing Project filed an emergency petition and application in a Harris County trial court seeking an order extending voting hours at polling locations across the entire county.”

‘Too Late to Unwind the Clock’

“Less than an hour before polling locations were set to close, the court extended voting hours one hour beyond the statutorily mandated 7:00 p.m. closing time. The State moved as quickly as possible to stem the damage from the unlawful TRO, and this Court almost immediately issued a stay order. But by the time the stay order [was] issued, it was too late to unwind the clock. The result was that some ballots were cast in violation of the Election Code,” Paxton wrote.

Paxton added that the trial court had also “acted without authority.”

The court on Tuesday stopped short of dismissing Paxton’s petition to have the late-cast votes thrown out in future elections.

The Epoch Times has contacted Paxton’s office for comment.

In an interview on Tuesday, Harris County Attorney Christian D. Menefee said the provisional ballots cast after 7 p.m. on Nov. 8 should be counted, adding that they are “still perfectly legal” and there is “nothing in the law that prohibits them from being counted.”

Meanwhile, Texas Gov. Greg Abbott has called for the Texas secretary of state, attorney general, and Texas Rangers to investigate how Harris County runs elections amid alleged “improprieties” in the way the latest elections were conducted.