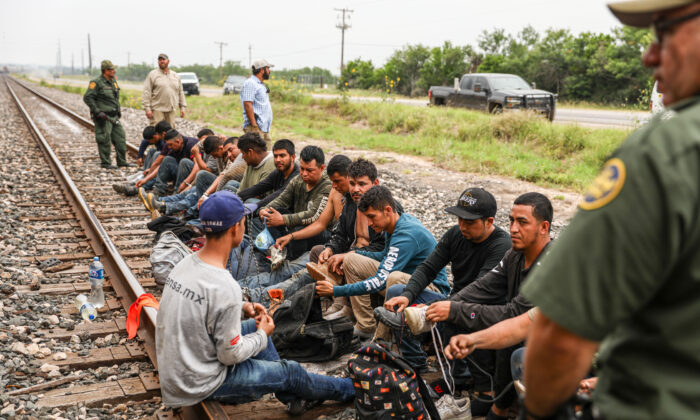 Border Patrol agents apprehend 21 illegal aliens from Mexico who had hidden in a grain hopper on a freight train heading to San Antonio, near Uvalde, Texas, on June 21, 2021. (Charlotte Cuthbertson/The Epoch Times)
Texas

The pair was focusing on the White House’s February decision to suspend the Trump-era policy of forcing illegal aliens to return to their country of origin amid the COVID-19 pandemic, using a provision known as Title 42 to block them from entering. Biden ended the provision and has released unaccompanied children and families into the United States, where they ostensibly await immigration court dates.

“In the other words, at the same time the Administration is urging Americans to get vaccinated, they are resettling thousands of unvaccinated illegal aliens into their cities, towns, and schools–and placing the cost and burden of all healthcare services for these new arrivals in the taxpayer tab,” Miller said in a statement about the lawsuit.

Miller argued that if illegal aliens who are not vaccinated are allowed to enter U.S. communities, it will lower the percentage of “that community’s population that has received a vaccine.” As a result, he said, it will be moved “further away from the herd immunity threshold.”

Recent data from U.S. Customs and Border Protection (CBP) show that more than 180,000 illegal immigrants were arrested by agents in May. That figure, critics and former officials point out, represents the highest number of encounters in decades.

Starting in January, Biden has issued dozens of immigration-related executive orders, many of which rescinded policies that were set during former President Donald Trump’s time in office, including the construction of the border wall, the “remain in Mexico” policy, and the policy that required immigrants from getting visas unless they proved they could obtain health insurance or pay for health care.

Biden and other White House officials explained that the administration’s executive actions were done to promote a more humanitarian agenda along the border, while claiming that the Trump-era policies were ineffective and divisive. Trump, in a number of statements after leaving office, has categorically denied their assertions.

Miller also argued that the Biden administration’s policy has violated guidelines promulgated by the U.S. Centers for Disease Control and Prevention (CDC) and other federal health agencies regarding mask-wearing, social distancing, and more.

“This anarchistic catch-and-release policy plainly and facially violates the administration’s own public health guidelines, regulations, and directives,” he said in a statement. “While Americans are still required to wear masks on planes and the CDC is still trying to shut down many aspects of daily life, the government is actively facilitating the entry of illegal aliens whose journey is defined by the radical absence of health protocols.”

He added that the “mass release” of untested and unvaccinated illegal immigrants poses a significant health threat for “all Americans” and “is explicitly contrary to the administration’s publicly stated goal of reopening through vaccination.”

The Department of Homeland Security, which oversees the border protection agency, didn’t immediately respond to a request by The Epoch Times for comment.