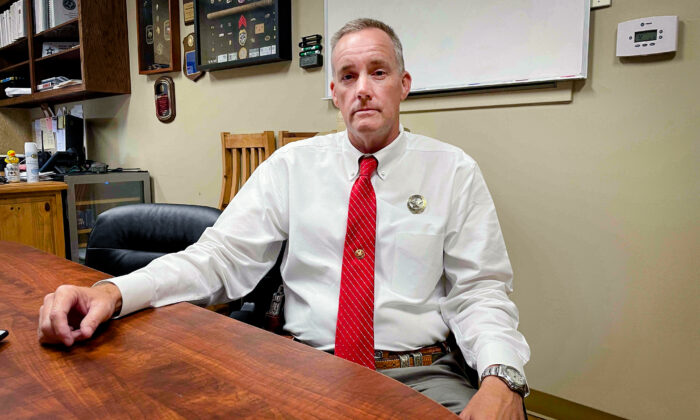 GOLIAD, Texas—Sheriffs in Texas are experiencing the effects of the border crisis in their counties every day—whether it’s armed cartel operatives smuggling illegal immigrants, vehicle pursuits resulting in crashes and deaths, or drug overdose deaths from fentanyl brought across the southern border.

As a 29-year law enforcement veteran in the region, Boyd said he’s never seen a border crisis so bad or border-related crime so egregious.

“It’s a movement of individuals from Third World countries, all over the place, into our country. But the farther you get into it, the more you realize it’s all done by design—and it’s at the design of the federal government.

“We’re in a transformation of America from a free Republic to moving to something that’s more of a Marxist state.”

Since President Joe Biden took office in January 2021, border authorities have apprehended more than 3.2 million illegal border crossers, according to Customs and Border Protection data. An additional 800,000 or so have been detected, but evaded capture.

When asked how allowing millions of people from more than 160 countries through the southern border results in the transformation to communism, Boyd harkened back to the 1960s and President Lyndon B. Johnson’s “war on poverty.”

“LBJ sold the war on poverty to the Democratic National Party … and the DNC’s response was, ‘Why would we give those people something for nothing?'” Boyd said.

LBJ responded by saying he’d have them voting Democratic for 200 years, Boyd said, paraphrasing an infamous quote that has been widely attributed to the former president.

“This is nothing but a replication of the soft enslavement of people through entitlement,” Boyd said. “Because if you understand psychology and you look at the history of things, this is how it functions. Once it starts, it’s hard to stop.”

Trevor Loudon, a communism expert and contributor to The Epoch Times, said in a previous interview that the communists’ main enemy is the United States.

“You will have a one-party state in America. And that is the plan. That is why they are doing this,” he said.

“This is Marxist. This is Leninist. And this goes back to American politicians cooperating with hostile foreign powers in the destruction of America. And their No. 1 weapon is illegal immigration and overwhelming the border.”

Traditionally, noncitizens have voted about 80 percent Democratic and 20 percent Republican, according to a 2014 study by Old Dominion University.

“We find that some non-citizens participate in U.S. elections, and that this participation has been large enough to change meaningful election outcomes including Electoral College votes, and congressional elections,” the study concluded.

Now, the number of non-Hispanic illegal aliens entering the United States is increasing at the same time that Hispanics are skewing more Republican, as evidenced by Rep. Mayra Flores’s recent win in south Texas.

While it’s illegal for non-U.S. citizens to vote in federal elections, there’s been a push for years for municipal elections to accept noncitizen voters, including visa holders.

Loudon pointed to Eliseo Medina, a labor union activist and former immigration consultant to President Barack Obama, as a main driver of the illegal immigration movement.

“[If] we reform the immigration laws, it puts 12 million people on the path to citizenship and eventually voters,” Medina said in 2009 at the America’s Future Now progressives’ conference in Washington. “Can you imagine … [even] if we get 8 million new voters that care about our issue and will be voting—we will create a governing coalition for the long term, not just for an election cycle.”

Fourteen municipalities currently allow noncitizens to vote, including 11 in Maryland, two in Vermont, and one in San Francisco.

A recent court ruling quashed a New York City law that would have allowed at least 800,000 noncitizens to vote in municipal elections.

“I believe that New Yorkers should have a say in their government, which is why I have and will continue to support this important legislation,” Adams said in a statement at the time. “I believe allowing the legislation to be enacted is by far the best choice, and look forward to bringing millions more into the democratic process.”

“The whole point of the open borders crowd is to do two things: one, extinguish the line between legal and illegal aliens in this country. And second, to frankly get rid of the whole concept of citizenship,” Spakovsky said in a previous interview.

Biden has said he wants a pathway to citizenship for all illegal immigrants in the United States.

Boyd said the Biden administration is working hard to purge conservative and constitutional thinkers at the federal level and replace them with people with a socialist mindset.

“But always remember, as Stalin said, the aim of socialism is communism,” Boyd said.

He said his focus remains in Goliad to protect his county and make it an unwelcoming place for criminals. The sheriffs in the region try to work together to “help each other to fight this massive wave of criminal activity,” he said.

“But we’re fighting all the felonies that are being brought to our doorstep as a result of the national policy that’s causing this problem. And to be quite honest with you, I have no faith in the federal government.”

“My faith is in our Lord and Savior. One day, we’re going to meet the end and we’re going to have to answer for what it is we’ve done, and so I want to have a good answer when I get there.”