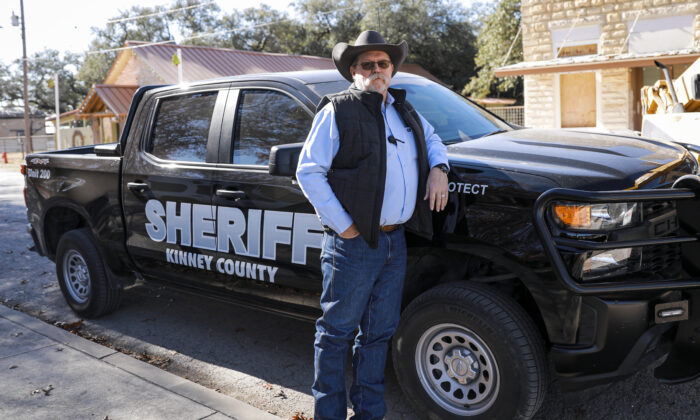 KINNEY COUNTY, Texas—Kinney County sheriff’s deputies responded to a suspected smuggling vehicle on a county road early in the morning on June 29. During the ensuing pursuit, the fleeing driver lost control of the vehicle and flipped it.

The driver, a Mexican national wearing a cartel-related medallion, was taken into custody and is facing at least seven felony charges, according to Kinney County Sheriff Brad Coe.

Of the five passengers, all illegal immigrants, one female was taken to the hospital in Del Rio for non-life threatening injuries, while the remaining four declined medical treatment.

Coe said Border Patrol told him they could take the four uninjured illegal aliens into custody for processing only if they had been checked medically first.

“Well they had declined any type of medical help,” Coe told The Epoch Times. “So I can’t let them walk the streets. I can’t say, ‘Hey, go, be free.’ Because I still have to protect the Constitution and protect the people in the county.”

Coe said he loaded the three males and one female into his truck and drove to Eagle Pass, about an hour away, and dropped them off at the port of entry between the United States and Mexico.

In response to a question by The Epoch Times about the sheriff’s move, Texas Gov. Greg Abbott said the sheriffs in Texas play a “vital role” up and down the border.

“I applaud all of our sheriffs for having to respond in unprecedented conditions. And that’s causing all of us to use unprecedented action,” Abbott said during a press conference in Eagle Pass on June 29.

“And so whether it’s doing what that sheriff in Kinney County is doing, or what we’re doing, such as turning back more than 20,000 people, we all have our own tools and strategies that we use to either turn back or to return people across the border.”

Coe said he agrees with Abbott that local law enforcement shouldn’t have to be tying up so many resources on the border issue.

“But to let them go, undocumented, unaccounted for, just go because of a policy—I couldn’t do it. It’s going to be the exception rather than the rule. But at the same time, if Border Patrol won’t take a group for whatever reason, I don’t have a choice.”

He said he’s not sure if there will be any legal ramifications—”We’ll see what happens.”

Kinney County deputies have arrested 66 smugglers so far in June as the county remains a thoroughfare from the U.S.–Mexico border to San Antonio.