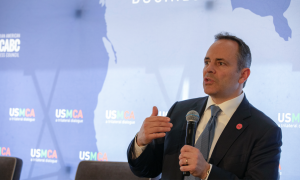 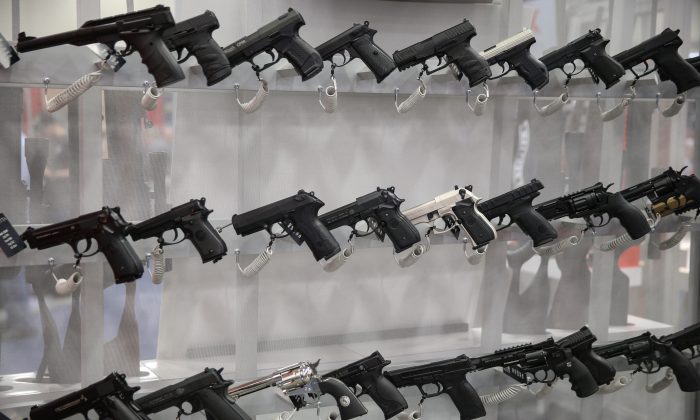 Firearms are pictured in an exhibit hall at the Kay Bailey Hutchison Convention Center during the NRA's annual convention in Dallas, Texas, on May 6, 2018. (Loren Elliott/AFP/Getty Images)
Texas

The Texas Senate approved a bill on May 5 that would allow eligible residents 21 years and older to carry a holstered handgun, openly or concealed, without a permit, also known as constitutional carry.

House Bill 1927 passed the Republican-led Senate in an 18–13 vote following a lengthy debate and will now head back to the House to debate amendments and settle differences between the two chambers’ versions. The House had passed the measure in mid-April.

Gov. Greg Abbott has previously signaled that he’s supportive of such a measure and told WBAP’s Rick Roberts last week that he was willing to sign it.

“Once the Senate passes it out, the House and Senate will convene and work out any differences and get it to my desk and I’ll be signing it,” Abbott said.

Under current Texas law, residents are required to obtain a permit to carry handguns. To obtain the permit, applicants must complete classroom training, pass a written exam, submit fingerprints, and pass a proficiency demonstration.

Republicans say the proposed law will help remove some barriers for Lone Star State residents to carry a handgun and hence save them time and money.

State Sen. Charles Schwertner previously defended the bill at a committee meeting following the House’s passage of the measure.

“Right now, we have the license to carry—the LTC—and it is a hurdle for some individuals to avail themselves of their constitutional right to keep and bear arms, and I think that is a hurdle that should be removed. That’s what this bill does,” he said.

Opponents of the law, including state Democrats, have expressed concerns that the proposed bill would allow individuals to obtain a handgun without appropriate training or background checks. Some members of law enforcement have also expressed concerns about the bill.

“Guns are easier to obtain than ever before, and it has become more common for people to use them. Weakening training regulations and effectively eliminating training requirements is not the direction that we should be going right now,” Chacon said.

Lt. Gov. Dan Patrick, who previously expressed worry that the Senate lacked the votes to pass the measure, issued a statement on May 5 welcoming the passage.

“I am proud that the Texas Senate passed House Bill 1927 today, the Constitutional Carry bill, which affirms every Texan’s right to self-defense and our state’s strong support for our Second Amendment right to bear arms. In the Lone Star State, the Constitution is our permit to carry,” Patrick said.

The National Rifle Association had previously expressed support for the measure, saying in a statement that “it’s time for Texas to join the 20 other states that have legalized this personal protection option.”