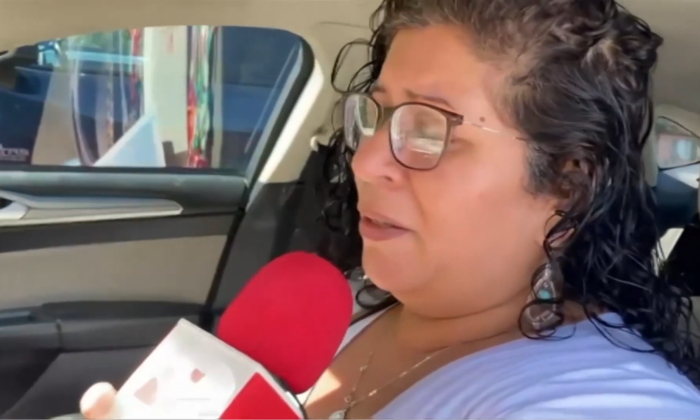 Adriana Martínez Reyes, mother of Texas school shooter Salvador Ramos, in an interview with Spanish-language TV station Televisa in Uvalde, Texas, on May 25, 2022. (Noticieros Televisa via AP/Screenshot via The Epoch Times)
US News

The mother of Robb Elementary School shooter Salvador Ramos is begging for forgiveness from the victims and the victims’ families.

“Forgive me, forgive my son. I know he had his reasons,” Adriana Martínez Reyes, mother of Salvador Ramos, said to the victims’ families in an interview with Spanish-language station Televisa.

When prompted about what reasons Ramos could have had, the mother said, “To get closer to those children instead of paying attention to the other bad things. I have no words. I don’t know.”

She described to the reporter that Ramos was “very quiet.”

“He was himself. He didn’t bother anybody. He didn’t do anything to anybody,” she said.

Ramos open fired on students and teachers at Robb Elementary School with a semi-automatic rifle on May 24, killing 19 children and two adults. Seventeen students were injured.

Fox News Digital reported that Adriana Reyes was praying on the front porch of her parents’ home on the evening of May 26.

Juan Alvarez, the boyfriend of Reyes, told NBC News on May 25 that Ramos left to live with the 18-year-old’s grandparents two months ago after a heated argument with Reyes over internet usage. Ramos was living with Juan Alvarez and Adriana Reyes before he left, according to Alvarez.

“He was kind of a weird one. I never got along with him. I never socialized with him. He doesn’t talk to nobody,” Alvarez said. “When you try to talk to him he’d just sit there and walk away.”

Reyes’s boyfriend’s mother, Maria Alvarez, told Fox News on May 25 that Reyes accompanied Celia Martinez Gonzales—grandmother of Ramos, whom Ramos shot in the face—to a hospital in San Antonio earlier.

According to Maria Alvarez, Reyes said she could not believe that Ramos would do such a thing to his grandmother, adding that he “loved” his grandmother.

As of Friday morning, Ramos’s grandmother, presumably the 66-year-old woman hospitalized in the University Hospital at San Antonio, is still in “serious condition,” according to a tweet on the hospital’s Twitter page.