Lawmakers criticize Biden for 'sitting idly by' during 'security crisis' 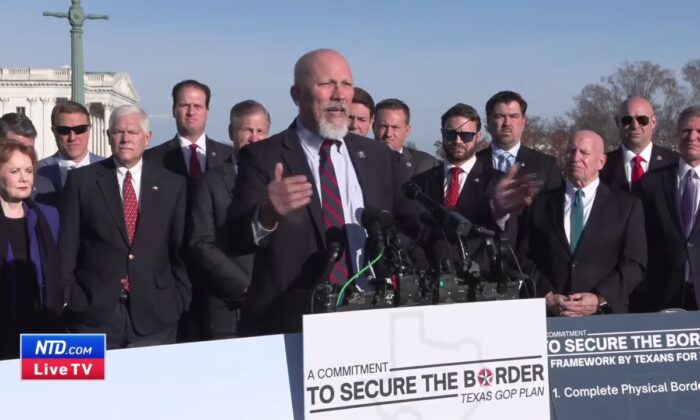 Rep. Chip Roy (R-Texas), along with other Republican members of the Texas Delegation, unveil their border security agenda for the 118th Congress at a press conference in Washington on Dec. 8, 2022, in a still from video released by NTD. (NTD)
By Mark Tapscott

Mark Tapscott
Congressional Correspondent
Mark Tapscott is an award-winning investigative editor and reporter who covers Congress, national politics, and policy for The Epoch Times. Mark was admitted to the National Freedom of Information Act (FOIA) Hall of Fame in 2006 and he was named Journalist of the Year by CPAC in 2008. He was a consulting editor on the Colorado Springs Gazette’s Pulitzer Prize-winning series “Other Than Honorable” in 2014.
View profile
and Madalina Vasiliu

An estimated 300,000 young people are being sex-trafficked in Texas as a result of the Biden administration’s open-border policies, U.S. Rep. Kevin Brady said on Dec. 8 during a chilly outdoor news conference to unveil a new plan to stop the flood of illegal immigration.

“This morning as we gather, there are approximately 300,000 young Texans in the sex-slave industry in our state. Because of this open-border policy, they are in a life that is just a living hell,” Brady, a Texas Republican who’s retiring at the end of the 117th Congress, told reporters.

“No state pays a deeper price for these open borders than our state. This is a security crisis, this is a humanitarian crisis, it’s a sex-trafficking crisis, it is a fentanyl crisis. No delegation in Congress has more expertise or better solutions to address this border crisis than here in the Texas delegation.”

Brady was among 23 lawmakers from Texas who repeatedly stressed their view that President Joe Biden’s opening of the U.S. border with Mexico has allowed record numbers of illegal immigrants to surge into the United States in only two years.

In the month of November alone, federal officials said that more than 73,000 “gotaways”—illegal immigrants who manage to evade law enforcement authorities—made it into the United States, the largest single-month total ever for the category.

Roy was referring to the fact that much of the materials and chemicals needed by the Mexican drug cartels to produce fentanyl are obtained from China.

“While the president dismisses this as unimportant, we’re all here to say it’s critically important,” he said.

The Texas representatives have a four-point plan that they say will “secure the border once and for all.” The 13-page description of the plan, which was made public on Dec. 8, says the new approach is needed because the state is being overwhelmed by the more than 4 million illegal immigrants that “have been encountered at our southern border since President Biden took office.

“The Biden Administration has released between 1–2 million of these individuals into the interior—not including approximately 1 million known ‘gotaways’ since [he took office],” the description reads.

“At least 98 people on the terrorist screening database were apprehended in 2022. Further, more than 24,000 lbs. of fentanyl have been seized since President Biden took office. Texans are in imminent danger, and Texas leadership is right to use all powers under their authority to defend Texas’ border and its citizens.”

The border crisis has cost Texas more than $3 billion since 2021, the plan estimates.

The first point of the plan is to complete the border wall begun by former President Donald Trump and to build an estimated 700 miles of roads to enable U.S. Customs and Border Patrol agents to move quickly and freely along the border as needed.

The second point is to update U.S. law to ensure that the Department of Homeland Security can send illegal border-crossers back to Mexico to await their judicial proceedings to decide whether they will be allowed to return to this country. The Texans also want Congress to withdraw federal funding from all nongovernmental organizations that they believe are encouraging illegal immigration.

The third point is to enforce all current immigration laws that the Biden administration has failed to enforce and to increase enforcement and penalties against criminal aliens and visa overstayers.

The fourth point of the plan is to declare as terrorist organizations the Mexican drug cartels that are importing record amounts of illegal drugs into the United States across the southern border, including fentanyl, which has killed an estimated 100,000 Americans since 2021.

Many of the Texans were especially critical of Biden for his remark earlier this week that he “has more important things” to do than visit the southern border.

Similarly, Rep. Dan Crenshaw (R-Texas) noted that “as migrants and fentanyl continue to pour over our southern border, the Biden administration sits idly by and refuses to even acknowledge this devastating crisis.”

Rep. Jodey Arrington (R-Texas) said the estimated 13 million additional illegal immigrants who are projected to enter the country through 2024 after the expiration of Title 42 on Dec. 21 “will change Texas forever, and indeed our country. That is why there has got to be the greatest sense of urgency about this.”

In Texas, “the hospitals are overrun, and the schools are overrun. Our law enforcement is overrun,” Arrington said. “And they’re getting no help from their federal government, which is responsible for border security and the defense of our citizens.”

He added that “no one understands or appreciates the widespread social and economic costs of Biden’s unprecedented open-border crisis like the people of Texas. It only makes sense for the Texas delegation to lead the way in using every tool and authority to secure the border, defend our sovereignty, and protect our citizens—and all Americans—from this epic disaster.”