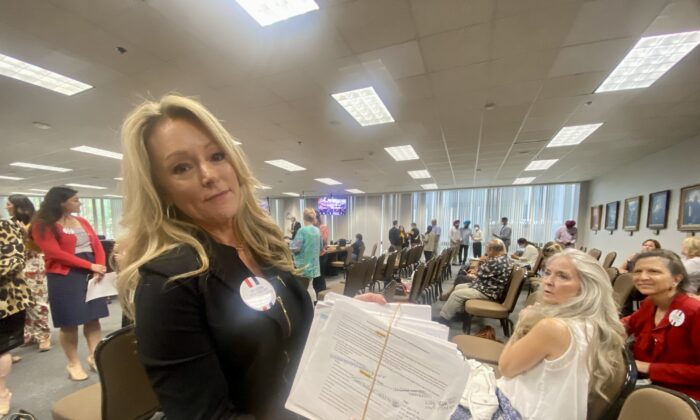 AUSTIN, Texas—In a win for conservative parents, the Texas state education board voted to shelve changes to the social studies curriculum after dozens of parents objected to adding gender, Critical Race Theory, and LGBT into education standards.

More than 100 parents and group representatives signed up to discuss the proposed curriculum and state requirements. State Board of Education members said they received thousands of emails and hundreds of phone calls from parents and teachers.

After a marathon session, they voted to make basic updates to the social studies curriculum to meet new legal requirements from Senate Bill 3. They put off the social studies changes until 2025, giving them time to come up with a better framework for changes.

The meeting started in the morning and stretched into the evening. Parents expressed concerns with what was being left out of the social studies curriculum as much as controversial issues being put into it.

Most opposed removing or watering down the idea of Texas and American exceptionalism.

But teachers and professors who spoke in favor of the changes said adding gender and LGBT issues into the conversation made Texas more inclusive for everyone. They urged the board to adopt the changes, saying the time to act was now.

Lawrence Scott, a professor and former assistant principal, considers himself a moderate. He spoke up at the meeting, saying he thinks the changes should be made. Teachers were afraid to teach social studies for fear of running afoul of Senate Bill 3, which banned Critical Race Theory.

“What kind of America do we want our kids to live in?” he asked the board.

Scott told The Epoch Times that finding common ground in discussing complex topics is important to furthering mutual understanding. He said people shouldn’t be afraid to talk about race and history.

The 15 elected board members were mostly divided along party lines on the issues.

Democrats said the workgroups of teachers and professors from academia had put in hundreds of hours of work to draft an excellent social studies curriculum.

Republicans indicated it was essential to consider parents as stakeholders in their children’s education and seemed concerned about the outcry.

“If you knew about what you were testifying about, then you would be able to find out what TEK you were referring to,” Perez-Diaz said. “You should know.”

“I don’t appreciate your belittling,” countered parent Jena Masquelier who brought up border issues. “No, I cannot find it in the TEKS in 300 pages.”

In assessing Masquelier’s border discussion, Perez-Diaz said it was essential to know the history.

“This country did not always have borders. We’re sitting on stolen land,” Perez-Diaz said to loud complaints from the audience.

Rick Green, a former state representative who authored Freedom Week legislation, said the legislations purpose was for students to understand the greatness of the U.S. Constitution and founding principles of America.

He expressed disappointment in the condescending comments toward parents from some board members.

Green said students must be taught to love and defend their nation, not to hate it.

He said looking at social studies through a lens of race aligns with CRT’s cultural Marxism rather than American exceptionalism. He added that Freedom Week is a law and must be applied.

“The emphasis cannot be the ugly. This is the greatest nation in the history of the world,” he said.

Parents spoke against Critical Race Theory, the sexualization of children, and abandonment of family values in social studies. They questioned why the board wanted to push through changes before parents could better understand the curriculum that would be in effect for the next 12 years once adopted.

They objected to students learning about intersectionality of (gay) pride, civil rights, and other movements instead of focusing on improving reading, writing, and math skills.

The educational standards also called the Texas Rangers, an elite law enforcement group, “an instrument of oppression” during the clash between Texas Rangers and Mexican Americans and immigrants during the Mexican Revolution.

Mary Castle, who spoke for Texas Values, noted that “In God We Trust” was removed from social studies.

She later told The Epoch Times her group began monitoring the social studies changes and reviewing the drafts. She did not feel the process should be transparent.

“I think from the beginning, the process has not been as clear as it usually is,” she said, adding the public didn’t get a chance to speak at the Aug. 1 special meeting until after 1 p.m.

The social studies curriculum needed to be changed to meet the requirements of Senate Bill 3, legislation that banned CRT, which uses race instead of class struggle to label people as oppressors or victims.

But parents and pro-Texas groups became alarmed after hearing the board decided to overhaul the social studies educational standards completely.

Parents worried that fast-tracking the curriculum was an intentional tactic to radicalize what children should learn.

Pastor Rick Scarborough, president of Recover America, drove out from a training session in an attempt to speak before the board.

If the next generation of students is lost to socialism, America will cease to exist, Scarborough said.

He added that parents should push for school choice to remove their students from harmful content.