Texas Officials Seize Over 342 Million ‘Lethal Doses’ of Fentanyl Over 1 Year, Enough to Kill Everyone in US 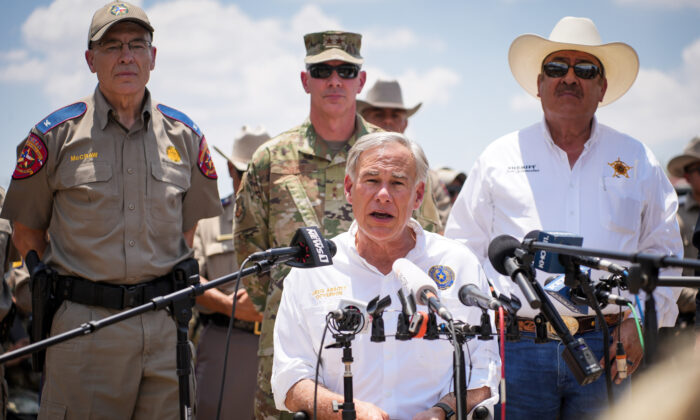 Law enforcement officers in Texas have seized over 342 million lethal doses of fentanyl in the past year as part of Gov. Greg Abbott’s “Operation Lone Star,” according to his office.

Abbott, a Republican, said in a press release on Monday that the millions of lethal doses are enough to kill every man, woman, and child in the United States.

The giant seizure of drugs comes as Texas is battling with a chronic border crisis, which Abbott has largely blamed on the Biden administration’s lax immigration policies.

Fentanyl is a potent synthetic opioid that is 50 times stronger than heroin and 100 times more potent than morphine. As little as two milligrams is potentially enough to be lethal.

An increasing number of Mexican cartels have been importing fentanyl from China before pressing it into pills or mixing it into other counterfeit pills made to look like Xanax, Adderall, or oxycodone. The drugs are then sold to unaware buyers in the United States.

“Fentanyl remains the single deadliest drug threat our state and nation has ever encountered, killing four Texans every day,” said Abbott in a statement on Monday. “Fentanyl is a clandestine killer, with Mexican drug cartels strategically manufacturing and distributing the drug disguised as painkillers, stimulants, anti-anxiety drugs, and even candy.”

In September, Abbott officially designated Mexican cartels as terrorist organizations in Texas, allowing state law enforcement to use enhanced apprehension and prosecution powers to bring down such organizations while ramping up public awareness of their deadly activities to the local and international community.

Fentanyl Deaths on the Rise

“In the Biden Administration’s negligence to address this national security threat, Texas has designated Mexican drug cartels as terrorist organizations and is launching a statewide public awareness campaign to fight the fentanyl crisis in our state,” Abbott said Monday while unveiling the state’s new “One Pill Kills” campaign aimed at informing Texans that just one pill laced with fentanyl can be deadly.

“Together, we will protect more innocent lives from being lost to this deadly drug,” Abbott said.

According to Abbott’s office, nearly 1,700 Texans lost their lives due to fentanyl in 2021. Separate data from the Centers for Disease Control and Prevention estimate that there were roughly 107,622 drug overdose deaths in the United States during 2021, up 15 percent from the 93,655 deaths estimated in 2020.

Mass overdose events, whereby three or more overdoses occur within the same location and within a close period of time, have also been on the rise across the country, with the Drug Enforcement Administration (DEA) warning earlier this year that such events were occurring at an “unprecedented” rate.

The DEA said in September that it had seized more than 10.2 million fentanyl pills and approximately 980 pounds of fentanyl powder during the period of May 23 through Sept. 8, 2022, as part of a joint enforcement operation.

That was equivalent to more than 36 million lethal doses removed from the illegal drug supply, officials said.