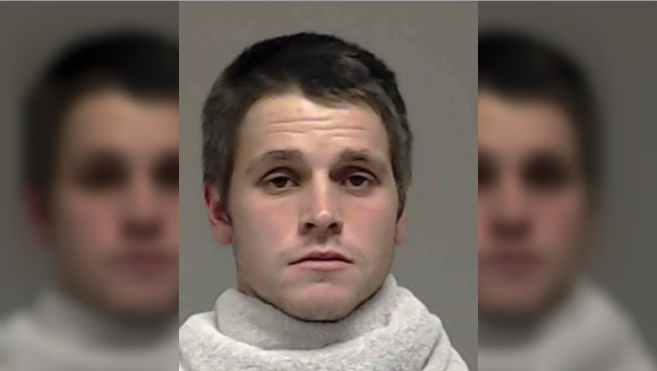 Andrew Lacy Callaway has been sentenced to 12 years in prison on charges of animal cruelty and probation violation. (Collin County Sheriff's Office)
Crime and Incidents

A Texas man who stomped on a boxer puppy and threw it against a wall, leading to its death, has been sentenced to 12 years in prison on charges of animal cruelty and a probation violation.

Andrew Lacy Callaway will serve concurrent sentences of 2 years for abusing the dog and 10 years for violating his probation in a previous drug case, the Dallas Morning News reported.

The 27-year-old was arrested in May 2017 after witnesses reported seeing the man abusing the puppy. The injured dog was taken to the Wylie Animal Shelter and diagnosed with multiple fractures of the legs and hips.

Veterinarians performed surgery on the puppy, named Diesel, but in the end, were forced to euthanize it.

Ashes of the dog were brought to court to underscore the outrage the case has sparked.

“It’s not ok to hurt an animal,” said Collin County District Attorney Greg Willis, according to CBS Dallas-Fort Worth.

Man sentenced to 12 years in prison for stomping on, throwing puppy https://t.co/PgbrwsxVRX pic.twitter.com/NXti8w4yTj

Willis says the stern punishment handed down by Judge Mark Rusch sends a strong message that cruelty to animals is unacceptable.

“The sense out there in our community — I think this is true across the nation — is that animal cruelty will be tolerated. There’s no excuse for it and can’t be tolerated,” said Willis, according to the CBS report. “So, we need to send a strong message to people out there who abuse or hurt animals.”

According to CBS, the convicted defendant told the authorities he regretted harming the dog, and that he attacked Diesel in a fit of rage.

“There’s all sorts of studies out there that show a correlation between people who abuse animals will also hurt humans,” said Willis. “We have to make sure that we have an evidence-based prosecution. Sometimes, things happen and we don’t have the evidence for a strong case. In this case, we did have the evidence and it helped.”