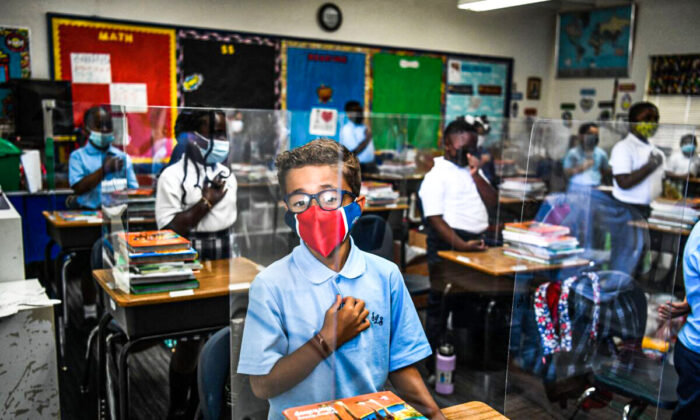 Students wear masks as they attend their first day in school after summer vacation at the St. Lawrence Catholic School north of Miami, on Aug. 18, 2021. (Chandan Khanna/AFP via Getty Images)
US News

A judge in Texas ruled on Wednesday that Gov. Greg Abbott’s ban on school mask mandates violates federal disability law and cannot be enforced by the state’s attorney general.

The ruling for the time being resolved the legal limbo in Texas over an executive order Abbott issued prohibiting school districts from imposing mask mandates. The lawsuit was brought by a disability group that argued that the ban made it unsafe for disabled students to attend school.

“Plaintiffs here have alleged that the use of masks by those around them is a measure that would lower their risk of contracting the virus and thus make it safer for them to return to and remain in an in-person learning environment,” U.S. District Court Judge Lee Yeakel wrote in an opinion on Nov. 10.

“The evidence here supports that the use of masks may decrease the risk of COVID infection in group settings. Plaintiffs here are at higher risk of contracting COVID that [sic] their non-impaired peers. But because [Abbott’s executive order] precludes mask requirements in schools, plaintiffs are either forced out of in-person learning altogether or must take on unnecessarily greater health and safety risks than their nondisabled peers.”

“My Agency is considering all legal avenues to challenge this decision,” Paxton said on Twitter.

Kym Davis Rogers, the litigation attorney for Disability Rights Texas, the group which filed the lawsuit, said in a statement, “We are thankful that school districts can now take the steps necessary to protect these students.”

“No student should be forced to make the choice of forfeiting their education or risking their health, and now they won’t have to,” Rogers added.

Lawsuits over the school mask mandates largely skirt over whether the measures are effective at preventing the spread of the CCP (Chinese Communist Party) virus, commonly known as the novel coronavirus. The science on the matter remains shaky, while its harms are understudied.