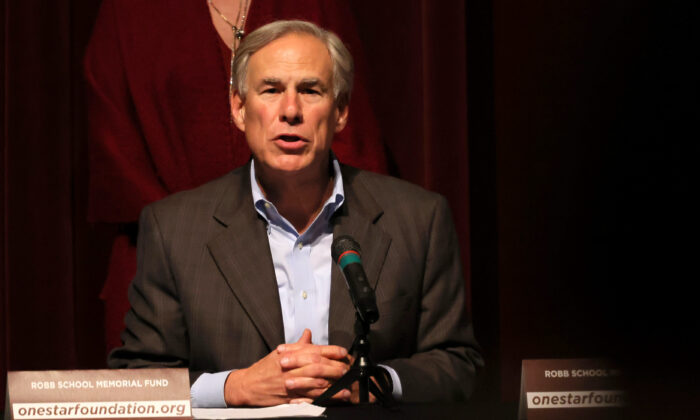 Texas Gov. Greg Abbott speaks during a press conference about the mass shooting at Uvalde High School in Uvalde, Texas, on May 27, 2022. (Michael M. Santiago/Getty Images)
By Mimi Nguyen Ly

Texas Gov. Greg Abbott has instructed state officials to start carrying out random inspections at schools in the state.

“Among other reviews, your team should begin conducting in-person, unannounced, random intruder detection audits on school districts,” Abbott said in a letter (pdf) to the state’s school security officials.

“Staff should approach campuses to find weak points and how quickly they can penetrate buildings without being stopped,” he said.

“This will help determine if schools are prepared to implement and follow the [Emergency Operations Plans] they have already submitted to the state,” he added. “This will improve accountability and ensure school districts are following the plans they create.”

The order comes after a mass shooting in Uvalde, Texas, that killed 19 students and two teachers at Robb Elementary School. An 18-year-old shooter had entered the school via a back door that was unlocked, according to the latest account of the situation by officials.

In his letter to Kathy Martinez-Prather, the director of the TxSSC, Abbott said more needs to be done after the tragic massacre. He also outlined several measures to “ensure that a culture of constant vigilance is engrained in every campus and in every school district employee across the state.”

State law requires school districts to create school security committees that are required to meet three times a year. Abbott asked Martinez-Prather to contact every school district to let them know they are expected to meet once this coming summer and to carry out several safety measures before the start of the 2022-2023 school year—specifically by Sept. 1, 2022, and report to the TxSSC by Sept. 9, 2022.

The measures include ensuring their security committee reviews their plans in cases of emergency and active threats. It also includes ensuring that all staff and substitute teachers are trained on the safety procedures of their specific campus and that all drills are scheduled before the start of the next school year.

A TxSSC spokesperson told the Texas Tribune that it is “designing a program and action items to specifically address the governor’s directives within the prescribed timelines.”

On the same day, Abbott sent a letter (pdf) to Lt. Gov. Dan Patrick and state House Speaker Dade Phelan requesting them to each convene a special legislative committee to review a series of topics in order to prevent future school shootings: school safety, mental health, social media, police training, and firearm safety. The committees would make recommendations to the state’s legislature and the executive branch over what meaningful actions can be taken.

Abbott also said in his letter to Martinez-Prather that the TxSSC should “immediately begin” working with his office and the state legislature on recommendations to improve current school security systems and decide on the funding needed to continue that work.

“This issue will no doubt be at the forefront of the next Legislative Session. You have my full support to make recommendations for consideration by the Legislature,” Abbott wrote.

The Epoch Times has reached out to Martinez-Prather for comment.