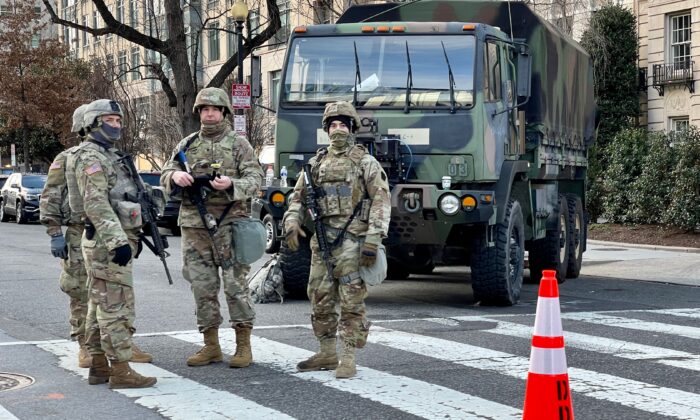 Texas Gov. Greg Abbott on Jan. 18 criticized the vetting of National Guard troops who are guarding Washington, calling it offensive.

“This is the most offensive thing I’ve ever heard,” Abbott, a Republican, wrote on Twitter. “No one should ever question the loyalty or professionalism of the Texas National Guard.”

Texas sent more than 1,000 guardsmen to Washington to help secure the nation’s capital before and during the inauguration of President-elect Joe Biden.

“I’ll never do it again if they are disrespected like this,” Abbott said.

No other governors had appeared to react to the vetting, according to a review of their social media pages.

Acting Department of Defense Secretary Christopher Miller confirmed earlier Jan. 18 that all National Guard personnel in the District of Columbia would be vetted.

“This type of vetting often takes place by law enforcement for significant security events. However, in this case the scope of military participation is unique,” he said.

Some 25,000 troops are in Washington, in an unprecedented show of force meant to stave off any follow-up plans to the Jan. 6 breach of the U.S. Capitol.

“I think everyone is rightfully sensitive and wants to make sure they leave no stone unturned. And given the time, given the situation, given the 6th of January, the FBI and others decided this would be a prudent move,” Acting Department of Homeland Security Secretary Peter Gaynor said during an appearance on Fox News.

Both Miller and Gaynor said there’s no evidence thus far of plans to carry out a so-called insider attack, or a plot from inside the National Guard against the U.S. government.

Rep. Steve Cohen (D-Tenn.) sparked pushback on Jan. 19 after claiming on CNN that the guard is “is 90 some-odd percent, I believe, male; and only about 20 percent of white males voted for Biden.”

“You’ve got to figure that in the guard, which is predominately more conservatives … There are probably not more than 25 percent of the people that are there protecting us who voted for Biden,” he said. “The other 75 percent are in the class that would be, the large class of folks who might want to do something.”

“To have voted for Trump does not make you an insider threat,” CNN anchor Jim Sciutto responded, asking if Cohen had any evidence of an insider attack being planned. Cohen said he didn’t.