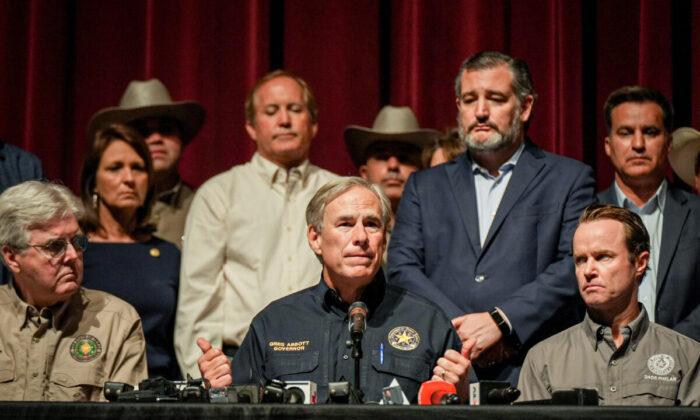 Texas Gov. Greg Abbott speaks at a press conference with federal, state, and local officials a day after a mass shooting at an elementary school, in Uvalde, Texas, on May 24, 2022. (Charlotte Cuthbertson/The Epoch Times)
Texas

Texas Republican Gov. Greg Abbott has canceled a planned appearance at the National Rifle Association (NRA) convention in Houston in the wake of the Texas elementary school shooting this week.

Abbott was scheduled to appear at the NRA’s annual leadership forum alongside Texas Sen. Ted Cruz and former President Donald Trump, according to the NRA convention website.

However, he will instead hold a press conference at Uvalde High School at 3:30 p.m. on Friday following a briefing with state agencies, local officials, and members of the community on state resources available for those impacted by the shooting, according to a press release from his office.

Abbott will be joined at the press conference by local officials and state agency representatives, his office said.

Salvador Ramos, 18, allegedly shot his grandmother on May 24 before driving toward Robb Elementary School in Uvalde and opening fire on the campus, killing 19 children and two adults. The suspect had attended Uvalde’s high school.

He also messaged a woman who said that Ramos was a total stranger, saying: “I’m about to” hours before Tuesday’s incident.

Ramos was shot and killed by law enforcement officers.

The latest elementary school incident marks the 27th school shooting in the United States this year alone and has prompted calls for the NRA to cancel its upcoming event; one of the most politically significant in the country.

Abbott said earlier this week that he was still unsure as to whether or not he would attend the event, telling a news conference on Wednesday: “As far as future plans are concerned, listen, I’m living moment-to-moment right now.”

“My heart, my head and my body are in Uvalde right now, and I’m here to help the people who are hurting,” the governor added.

Meanwhile, Democratic Texas gubernatorial candidate Beto O’Rourke urged Abbott not to appear at the NRA event, writing on Twitter: “if you have any decency, you will immediately withdraw from this weekend’s NRA convention and urge them to hold it anywhere but Texas.”

O’Rourke was escorted out of Abbott’s press conference on the school shooting on May 25 after he began yelling at Abbott about gun control laws.

The Democrat is also planning to attend a protest outside the NRA convention center on Friday along with several organizations, according to an event page posted by his campaign.

Abbott has noted that the Biden administration needs to address a change in mental health, and pointed to the fact that teenagers in Texas have been able to buy guns for decades during his press conference on Wednesday.