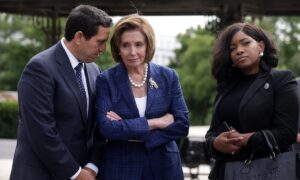 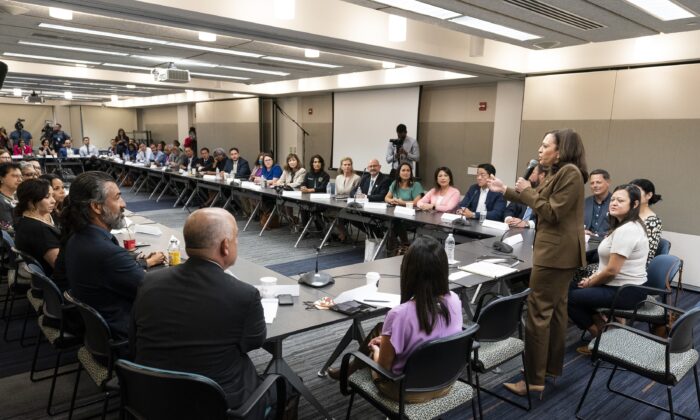 Vice President Kamala Harris meets with Democrats from the Texas state legislature at the American Federation of Teachers in Washington on July 13, 2021. (Alex Brandon/AP Photo)
Democrats

Texas Democrats will no longer release a daily COVID-19 case count after six state lawmakers contracted the virus, a spokeswoman for the state party said.

Cara Santucci, the spokeswoman for the Texas House Democrats, confirmed the party’s sixth COVID-19 case among the delegation to NBC News and told the media outlet that state Democrats will no longer release a daily case count.

“We’re focusing on our daily testing, following and going beyond [Centers for Disease Control and Prevention] guidelines, social distancing, and wearing masks as much as possible. We’re just not going to release daily counts,” Santucci said.

It’s unclear if she was asked a follow-up question regarding why the daily count would no longer be released.

Santucci didn’t provide an explanation for ending updates regarding their daily case count. The Texas House Democrats didn’t respond to a request for comment by press time.

One Texas Democratic lawmaker, Rep. Gene Wu, admitted that the caucus “got sloppy” when they traveled in a privately chartered plane to Washington last week, posting a photo of the group without masks on from the plane.

“Let our mistake be the object lesson. All of us had been fully vaccinated since March. We got complacent because we felt safe. We had no positives for months, and we got sloppy. Being vaccinated doesn’t ALWAYS stop you from spreading the virus. ALWAYS MASK UP INDOORS!” he wrote on Twitter alongside the photo.

On July 20, House Speaker Nancy Pelosi’s office confirmed that a Pelosi aide, who is fully vaccinated against the virus, contracted COVID-19 after having contact with members of the Texas House delegation last week. Pelosi (D-Calif.) was seen in media photos meeting with Texas Rep. Trey Martinez Fischer—who later confirmed that he tested positive for the virus—outside Capitol Hill several days ago.

“This individual has had no contact with the Speaker since exposure. The entire press office is working remotely today with the exception of individuals who have had no exposure to the individual or have had a recent negative test. Our office will continue to follow the guidance of the Office of Attending Physician closely,” Pelosi spokesman Drew Hammill told media outlets.

The reason why no quarantining is needed, Sanders said on July 17, is because health officials “determined the Vice President and her staff present at the meeting were not at risk of exposure because they were not in close contact with those who tested positive and therefore do not need to be tested or quarantined.”

Texas Democrats have said they left the state because they wanted to deny Republicans a quorum to prevent the passage of a voting overhaul bill—in a move praised by top Democrats such as Harris, Pelosi, and President Joe Biden. Republican Gov. Greg Abbott and other top state officials, however, have said the delegation will be arrested and detained upon arriving back to the Lone Star State.