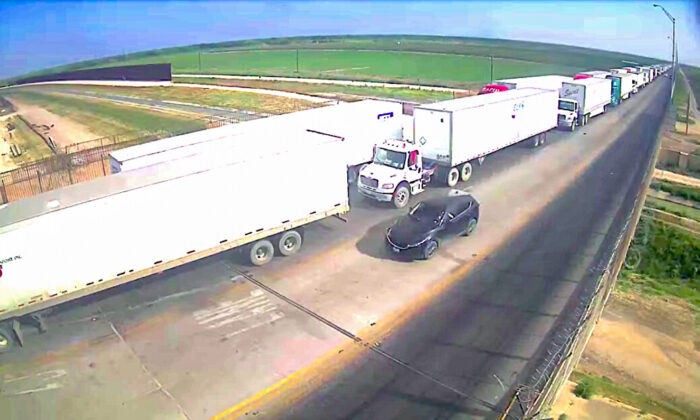 A screenshot of the live bridge cam looking into Mexico on the Pharr-Reynosa International Bridge on April 10, 2022. (Screenshot)
Immigration & Border Security

Significant slowdowns were recorded at the Pharr-Reynosa International Bridge, with the wait time increasing by as much as four hours, according to real-time data captured on the Customs and Border Protection website. Laredo and Brownsville bridges experienced the same increase in wait time.

Wait time is recorded from when a vehicle passes the Mexican toll gate until it clears U.S. customs.

The DPS inspections are occurring on state roads just beyond the ports of entry, which backs up the line into Mexico.

By the end of the day on April 9, DPS had inspected 2,390 commercial vehicles, of which 552 were taken out of service “for serious safety violations to include defective brakes, defective tires, and defective lighting,” according to Lt. Christopher Olivarez, spokesman for the DPS South Texas Region.

“Also, 73 commercial vehicle drivers were placed out of service,” Olivarez said. “The total number of violations detected thus far is 8,244.”

DPS hasn’t stated how long it intends to continue with the inspections. Mexico is Texas’s top trading partner with $88.5 billion worth of goods flowing both ways across the Texas–Mexico border annually, according to Global Edge.

“It’s kind of like a Mexican standoff,” Todd Bensman, national security fellow at the Center for Immigration Studies, told The Epoch Times. “I don’t think there’s any doubt but that it’s causing pain. And it’s going to cause more pain. So, it’s anybody’s guess what’s going to happen.”

He suggested three possible outcomes. One, Abbott will relent and stop the inspections; two, the Biden administration will sue the Texas government to stop the inspections; or three, Mexico will decide to enforce its own borders against illegal immigrants, much like when it took action in 2019 when Trump threatened to impose tariffs.

Dealing with illegal immigration is “an expensive, time-consuming proposition for the Mexicans. It’s not normally in their interest to do it,” according to Bensman.

“One way or another, if [Texas] keeps this going for another week, the presidents of both of these countries will have no choice but to get involved,” he said.

Abbott directed DPS to start conducting the inspections in a letter to the agency’s director, Col. Steven McCraw, on April 6.

“As you have explained, the cartels that smuggle illicit contraband and people across our southern border do not care about the condition of the vehicles they send into Texas any more than they care who overdoses from the deadly fentanyl on board,” Abbott wrote.

“In response to this threat, which is projected to grow in the coming months, I hereby direct the … DPS to conduct enhanced safety inspections of vehicles as they cross international ports of entry into Texas.”

Abbott made the announcement several days after the Biden administration stated that it intends to end the Title 42 pandemic-related expulsions at the border on May 23.

“The Biden Administration’s open-border policies have paved the way for dangerous cartels and deadly drugs to pour into the United States, and this crisis will only be made worse by ending Title 42 expulsions,” Abbott said in a statement.

Border Patrol agents are preparing to process up to 18,000 illegal immigrants per day along the southwest border once Title 42 ends.

In the past six months, 1 million illegal immigrants from 157 countries have been apprehended at the southern border, according to Border Patrol Chief Raul Ortiz.