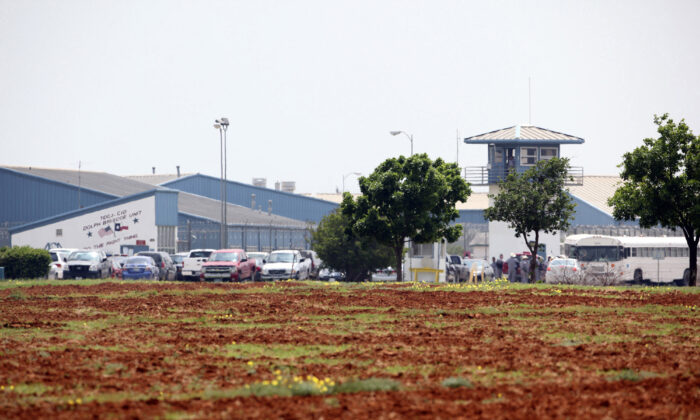 Authorities in Texas have begun arresting illegal immigrants along the U.S.-Mexico border on trespassing charges, according to Texas Gov. Greg Abbott, who has blamed the Biden administration for the surge in illegal immigration and has put in motion his own border security plan to crack down on illegal crossings.

“Texas has begun arresting illegal immigrants who are trespassing in Texas or vandalizing property & fences. They are now being sent to this jail rather than being released like the Biden Admin. has been doing. We are adding more officers, National Guard & jails,” Abbott said in a tweet Thursday.

So far, at least 10 people have been jailed, with more on the way, authorities said Thursday. The detainees are being held at what had been an empty state prison in Dilley, Texas, about 100 miles north of the border city of Laredo, according to Robert Hurst, a spokesman for the Texas Department of Criminal Justice. The converted facility will be able to hold more than 950 people, he said.

Val Verde County Attorney David Martinez said that all of those arrested so far have been single adult men. He said he had been advised last week that the number of arrests of illegal immigrants could rise to as many as 100 to 200 per day.

The arrests put in motion plans that Abbott first announced in June, when he hosted a Border Security Summit in Del Rio, during which he said individuals who enter Texas illegally would be subject to arrest for trespassing.

“President Biden’s open-border policies have led to a humanitarian crisis at our southern border as record levels of illegal immigrants, drugs, and contraband pour into Texas,” Abbott said in a June 10 statement. “While securing the border is the federal government’s responsibility, Texas will not sit idly by as this crisis grows. The state is working collaboratively with communities impacted by the crisis to arrest and detain individuals coming into Texas illegally.”

“Our efforts will only be effective if we work together to secure the border, make criminal arrests, protect landowners, rid our communities of dangerous drugs, and provide Texans with the support they need and deserve,” Abbott said at the time. “This is an unprecedented crisis, and Texas is responding with the most robust and comprehensive border plan the nation has ever seen.”

Illegal immigrants arrested by state troopers for trespassing first began showing up at the former prison on Tuesday. Prison officials said in a statement said that preparations for the Dilley facility included temporary air conditioning—which many Texas prisons don’t have in living areas—and training and licensing jailers.

Abbott has also announced that Texas would continue building former President Donald Trump’s border wall and called on other governors to deploy law enforcement and National Guard members to the southern border.

“In the Biden Administration’s absence, Texas is stepping up to get the job done by building the border wall,” Abbott said in a June 16 statement. “Through this comprehensive public safety effort, we will secure the border, slow the influx of unlawful immigrants, and restore order in our border communities.”

Federal immigration officials recently announced that they had apprehended 188,829 people illegally crossing the southwest border in June, up from 180,034 in May. The figure includes more than 15,000 unaccompanied minors, over 55,000 family units, and over 117,000 single adults.