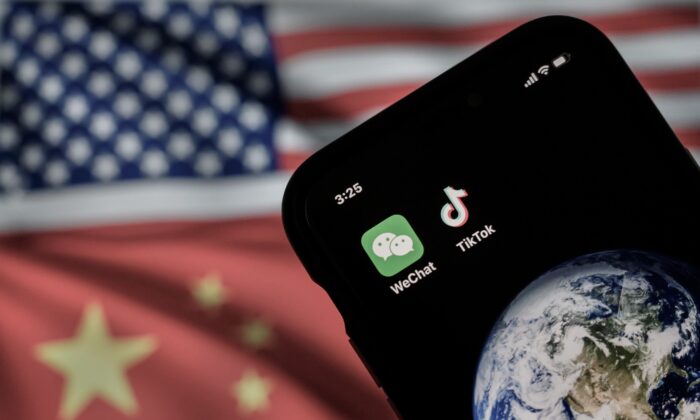 A mobile phone can be seen displaying the logos for Chinese apps WeChat and TikTok in front of a monitor showing the flags of the United States and China on an internet page, in Beijing, on Sept. 22, 2020. (Kevin Frayer/Getty Images)
By Mimi Nguyen Ly

The governor’s office said the “aggressive action” against TikTok comes amid a growing threat of “the Chinese Communist Party gaining access to critical U.S. information and infrastructure.”

In letters to state officials and agency leaders, Abbott emphasized the Texas government’s obligation to guard the cybersecurity of Texans.

“TikTok harvests vast amounts of data from its users’ devices—including when, where, and how they conduct Internet activity—and offers this trove of potentially sensitive information to the Chinese government,” Abbott stated in a letter to state agencies (pdf).

“While TikTok has claimed that it stores U.S. data within the U.S., the company admitted in a letter to Congress that China-based employees can have access to U.S. data. It has also been reported that ByteDance planned to use TikTok location information to surveil individual American citizens.

“Further, under China’s 2017 National Intelligence Law, all businesses are required to assist China in intelligence work including data sharing, and TikTok’s algorithm has already censored topics politically sensitive to the Chinese Communist Party, including the Tiananmen Square protests.”

TikTok is owned by private Chinese company Bytedance, which is based in Beijing, although it isn’t registered in China. Abbott’s office noted that TikTok “is owned by a Chinese company that employs Chinese Communist Party members.”

The office also noted that TikTok “has a subsidiary partially owned by the Chinese Communist Party.”

Per the ban, state officers and employees are immediately barred from downloading or using TikTok on any government-issued devices. This includes “cell phones, laptops, tablets, desktop computers, and other devices capable of Internet connectivity.”

The governor also stipulated that each state agency will have until Feb. 15, 2023, to implement its own policy over the use of TikTok on personal devices.

A TikTok spokesperson told The Epoch Times in an emailed statement on Dec. 7: “We believe the concerns driving these bans are largely fueled by misinformation about our company.”

“We are always happy to meet with state policymakers to discuss our privacy and security practices. We are disappointed that the many state agencies, offices, and universities that have been using TikTok to build communities and connect with constituents will no longer have access to our platform.”

FBI Director Christopher Wray recently warned of possible threats TikTok poses to U.S. national security, saying the CCP has the ability to leverage the app to manipulate content and carry out “influence operations” on Americans.

The CCP could also potentially use TikTok to collect data on its users, which could be used for traditional espionage operations, Wray stated. “All of these things are in the hands of a government that doesn’t share our values and that has a mission that’s very much at odds with what’s in the best interest of the United States. That should concern us,” he said.

Director of National Intelligence Avril Haines echoed the warning, adding that parents should also be concerned about their children using the app.

Meanwhile, Wisconsin’s top Republicans have called on the state’s governor, a Democrat, to ban TikTok.

“We write to urge you to ban TikTok from Wisconsin government devices and to lead by example and delete TikTok from your own devices. TikTok is nefarious [CCP] spyware that surveils American citizens, promotes CCP propaganda, and allows the CCP to censor and control Americans’ news and content,” the Wisconsin Republican congressional delegation told Gov. Tony Evers in a letter (pdf) dated Dec. 6.

The CCP “controls and directs TikTok,” they stated. Being a China-based company, TikTok’s owner Bytedance “is therefore bound by Chinese law to assist CCP intelligence agencies,” the Congress members wrote.

“ByteDance’s editor-in-chief, Zhang Fuping, is a CCP member and chairs the company’s Communist Party Committee,” they stated. “In a September 2020 court filing, the Department of Justice described ByteDance’s founder and former CEO, Zhang Yiming, as a ‘mouthpiece for the CCP’ and ‘committed to promoting the CCP’s agenda and messaging.'”

The members also pointed out that President Joe Biden also recognized TikTok’s threat and in July 2020 reportedly “required all of his presidential campaign staff to delete TikTok from their work and personal phones.”

Furthermore, the “CCP surveillance tool … tracks cell phone users’ data, including user location data, and users’ keystrokes, even when not even using the app,” thus enabling the CCP to “collect sensitive intelligence on Wisconsin government employees and even blackmail or pressure them based on this information,” Evers was told.

Update: This article has been updated with a statement from TikTok.