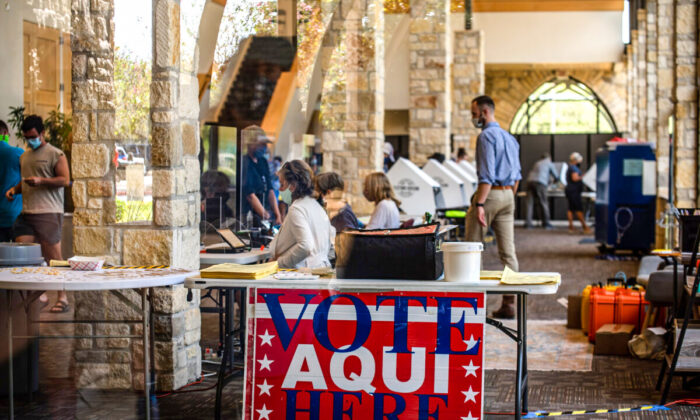 Voting irregularities—including potentially thousands of votes cast by noncitizens and dead people—were reported during the first phase of the Texas secretary of state’s forensic audit of the 2020 general election, but critics deemed it more of a risk-limiting audit at this point.

The secretary of state’s office released its findings on Dec. 31; the issues found aren’t enough to significantly affect 2020 election results of the four counties involved in the audit—Collin, Dallas, Harris, and Tarrant counties—which account for about 10 million people, or a third of Texas’s population.

“Generally speaking, nothing was found on such a large scale that could have altered any election,” Sam Taylor, assistant secretary of state for communications, told The Epoch Times.

Taylor said the state’s audit, currently moving into its second phase, is the first of its kind for Texas.

Secretary of State John Scott portrayed the audit as the country’s “most comprehensive forensic audit of the 2020 election,” according to a November statement. He said the audit will use “analytical tools to examine the literal nuts and bolts of election administration to determine if any illegal activity may have occurred.”

The Texas audit was announced soon after Trump wrote a Sept. 23, 2021, open letter to Texas Gov. Greg Abbott, whom Trump endorsed for reelection in 2022, pushing for a more thorough forensic audit of the 2020 election.

Trump’s letter asked Abbott to include legislation in the third special session that would allow for more comprehensive forensic audits of the 2020 presidential election in Texas, specifically pointing to House Bill 16 and Senate Bill 97. Those pieces of legislation would have allowed party officials to demand county-level audits in future elections and allowed for a 2020 audit as well. Ultimately SB 97, which had similar language as HB 16, was introduced but didn’t pass both chambers before the clock ran out on the third and final session this fall.

As it stands, the four-county audit is part of Senate Bill 1, a sweeping election bill passed by the Republican-led legislature in the second special session of 2021, but vehemently opposed by Democrats.

Legislators hoping to revive a fourth legislative session to deal with voting fraud issues say the current audit is limited in scope.

“We know that fraud has been taking place in Texas,” Toth told The Epoch Times. “We need a forensic audit.”

Sen. Paul Bettencourt (R-Houston), who introduced SB 97, agreed that Toth had a point. Bettencourt’s bill would have allowed audits to be conducted at the county level across Texas. However, he said the Secretary of State’s audit has the potential to become a forensic audit during phase two if it begins to dig into voting irregularities.

“My observation over time is that fraud is used against Democrats in their primaries and against the Republicans in the general election,” Bettencourt told The Epoch Times.

He pointed to some 3,000 nonresidents potentially voting in Harris County cited by the audit. Bettencourt said as far back as 20 years ago when he was a district voting clerk, he would use jury service data indicating noncitizens to purge them from the rolls. But at this point, he said the county appears to have abandoned such efforts.

Bettencourt noted other irregularities not covered by the state’s audit, such as a situation in Wichita Falls where a single-family residence was home to more than 500 registered voters.

While the Texas attorney general’s office lists only 386 active election fraud investigations, cases of voter fraud have increased in the state. In a Texan article, Jonathan White, head of the election fraud section in the Texas attorney general’s special prosecutions division, said cases were “higher than our historical average by a long shot.” There were 510 offenses pending against 43 defendants at the time, according to the article, with most stemming from mail-in ballots.

Issues such as how drive-thru voting was conducted in Harris County in 2020, now prohibited by SB 1, will be reviewed, Taylor said, adding there were claims of a 1,800 vote discrepancy between the number of voters checked in and the number of votes cast at drive-thrus. About 127,000 votes were cast in the Houston area this way.

“We have heard that number, but we have no idea where that number came from,” she told The Epoch Times.