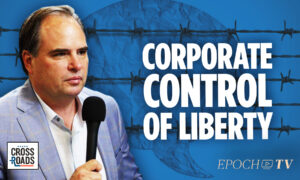 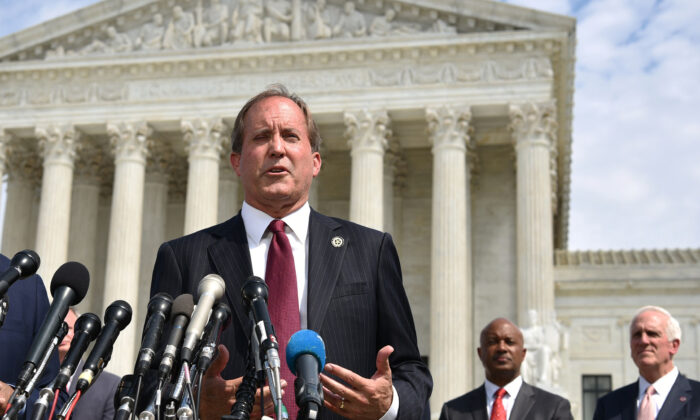 Texas Attorney General Ken Paxton speaks during the launch of an antitrust investigation into Big Tech companies outside the Supreme Court in Washington on Sept. 9, 2019. (Mandel Ngan/AFP via Getty Images)
Censorship & Socialism

Texas Attorney General Ken Paxton announced on Sept. 20 that he’s leading a coalition of 10 states in filing an amicus brief with the 11th Circuit Court of Appeals in support of Florida’s law that attempts to regulate censorship on Big Tech social media platforms.

Paxton signed on behalf of Texas, joining the states of Alabama, Alaska, Arizona, Arkansas, Kentucky, Mississippi, Missouri, Montana, and South Carolina who have also filed an amicus brief in support of Florida’s law.

“The regulation of Big Tech censorship will inevitably suppress the ideas and beliefs of millions of Americans,” Paxton said in a statement. “I will defend the First Amendment and ensure that conservative voices have the right to be heard. Big Tech does not have the authority to police the expressions of people whose political viewpoint they simply disagree with.”

Big Tech companies that violate the law can be brought to trial for monetary damages, and the state’s attorney general can litigate companies that don’t comply with the law under Florida’s Deceptive and Unfair Trade Practices Act.

Florida Gov. Ron DeSantis signed the bill into law in May but District Judge Robert Hinkle in June granted a temporary injunction preventing the governor from implementing the law after two internet trade groups—NetChoice and the Computer and Communications Industry Association—filed a lawsuit.

The trade groups argued that the law may violate the First Amendment by compelling social media platforms to host offensive speech they otherwise wouldn’t and by interfering with their editorial policies.

The coalition in its amicus brief said the district court’s First Amendment analysis is “riddled with errors.”

“It veered off course from the outset by concluding that S.B. 7072 regulates speech, when that law instead regulates conduct that is unprotected by the First Amendment: social media platforms’ arbitrary application of their content moderation policies,” the coalition wrote.

House Bill 20 prevents social media companies with more than 50 million monthly users, such as Facebook, Twitter, and YouTube, from banning users based on their political beliefs. The attorney general would also be able to take legal action on behalf of Texas residents that were banned or blocked by a platform due to such discrimination.

“We will always defend the freedom of speech in Texas,” Abbott said. “Social media websites have become our modern-day public square. They are a place for healthy public debate where information should be able to flow freely—but there is a dangerous movement by social media companies to silence conservative viewpoints and ideas. That is wrong, and we will not allow it in Texas.

“I thank Senator Bryan Hughes, Representative Briscoe Cain, and the Texas Legislature for ensuring that House Bill 20 reached my desk during the second special session.”