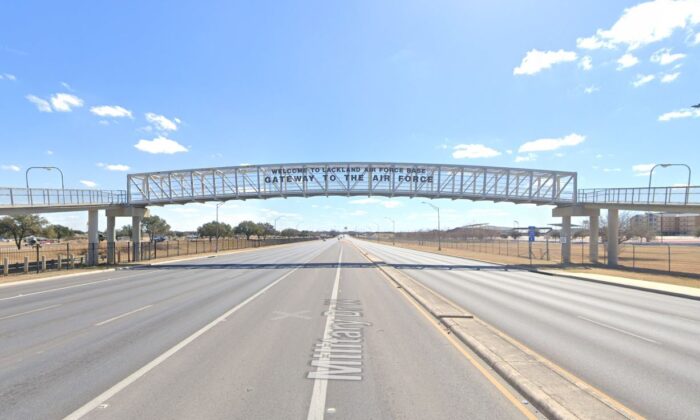 The gateway to the Lackland Air Force Base in Bexar County, Texas, in February 2022. (Google Maps/Screenshot via The Epoch Times)
Crime and Incidents

The lockdown at Texas’s Lackland Air Force Base in Joint Base San Antonio (JBSA) has been lifted following reports of gunshots heard off-base on Tuesday.

JBSA went into lockdown early on Tuesday after gunshots were heard off-base, according to reports.

In a statement on Twitter, JBSA officials said security forces and local law enforcement are responding to reports of gunfire in the vicinity of the massive military facility.

Authorities initially issued an “active shooter alert” following the reports, but police updated the alert about 30 minutes after saying there was not an active shooter situation and no threat to the public.

“South Patrol Officers are investigating a ‘shots fired’ call off Medina Base Road outside the gate at Lackland Air Force Base,” the San Antonio Police Department (SAPD) said in a statement.

“At this time, there is not an active shooter situation. Officers are continuing to investigate but there is no threat to the public,” the department added.

In an email sent to employees, officials said that all facilities in the Southwest area of Valley Hi and Truemper are also on lockdown while also urging people to take cover, local outlet KSAT News reported.

More information will be released later as members of the JBSA and SAPD further investigate and obtain more details, police said. Officials have not yet revealed whether the lockdown was lifted.

Last year, the Lackland Air Force Base also entered a brief lockdown after reports of two gunshots near one of the gates of the facility. The base reopened again after several hours of investigation.

“All base personnel implement LOCKDOWN procedures and immediately take cover,” the base posted on Twitter in a shooting warning on June 9, 2021.

JBSA comprises three locations, including Lackland. It is located in western San Antonio, Texas. The base is the largest joint base of the U.S. Department of Defense, according to the military facility’s website.