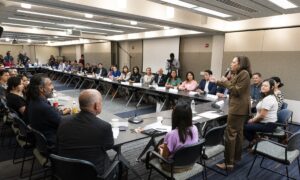 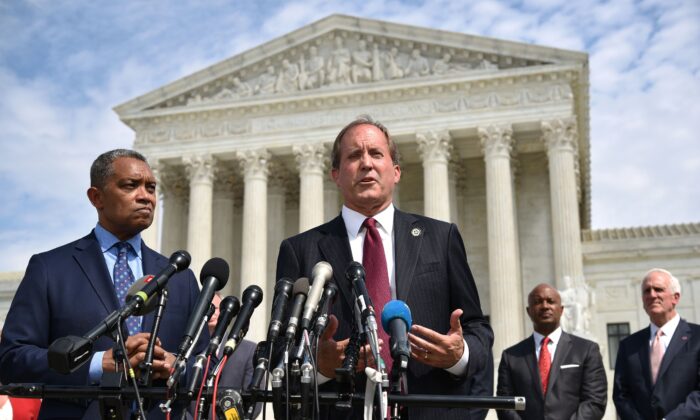 Texas Attorney General Ken Paxton speaks during the launch of an antitrust investigation into large tech companies outside of the U.S. Supreme Court in Washington on Sept. 9, 2019. (Mandel Ngan/AFP via Getty Images)
Regional News

Texas Attorney General Ken Paxton said he endorses an audit of the state’s 2020 election results, coming days after a state representative introduced a bill that would carry out an election review of Texas’s 13 most populous counties.

“I don’t know why we wouldn’t want to give people confidence in our elections, and give them the chance to know for sure that they’ve had an audit, and things are good or they’re bad,” Paxton told talk radio host Chad Hasty in an interview this week. “And it gives us an opportunity to figure out how we want to correct that.”

The audit proposal, Paxton admitted, may not be feasible because counties may not comply with the state Senate, leading to a drawn-out process involving court battles.

“I think he had, like, 15 of the top counties of the state. Well, that’s a lot of people, that’s a lot of votes,” Paxton said in reference to Toth’s bill. “I don’t know how much cooperation you’re going to get from some of those counties, so it could be an undertaking that takes quite a while, but it may be worth doing once just to see where we’re at,” he added.

Of the counties, only three—Collin, Denton, and Montgomery—voted in favor of former President Donald Trump in 2020. The remaining 10 Texas counties voted for President Joe Biden.

Republicans have said that audits and bills targeting election measures such as mail-in ballots, drop-boxes, and early voting are necessary to safeguard future elections and restore the public’s confidence in them. Democrats say GOP-backed audits are designed to damage the public’s trust in election institutions and have decried nearly all Republican election overhaul bills unfairly target minority voters.

Amid the months-long audit of Arizona’s Maricopa County’s Nov. 3 results, lawmakers in other Republican-led states like Wisconsin or Pennsylvania have pushed for election reviews of their own. Last week, an audit team that reviewed ballots and election equipment in Maricopa told a state Senate hearing they found thousands of discrepancies, although Maricopa County executives and Democrats have frequently denigrated the audit and said the results are not credible.

After Toth proposed his legislation, Democrats balked at a potential audit of the state’s election.

Rep. Chris Turner, who chairs the Texas House Democratic Caucus, told the Dallas Morning News on Tuesday that the audit legislation appears to be a bid to promote former President Trump.

“I don’t know if these folks are aware of it, Trump actually did carry Texas,” he said. “So I’m not sure what they’re trying to find in their audit.”

Without providing many details, Paxton on July 11 told an audience at the Conservative Political Action Conference (CPAC) in Texas that he’s investigating 386 more cases of alleged election fraud—in addition to more than 500 cases his office is probing. The cases, he added, are evidence that voter fraud does in fact occur, contrary to mainstream narratives that were deployed starting last November that there was no “widespread” fraud during the election.

“Do not believe the narrative, because in Texas we are going to fight election fraud,” Paxton said at the event, arguing that Republican candidates would have struggled during election day last year if his office hadn’t stopped local election officials from allegedly breaking balloting rules.

The Epoch Times has reached out to the Texas House Democratic Caucus for comment.