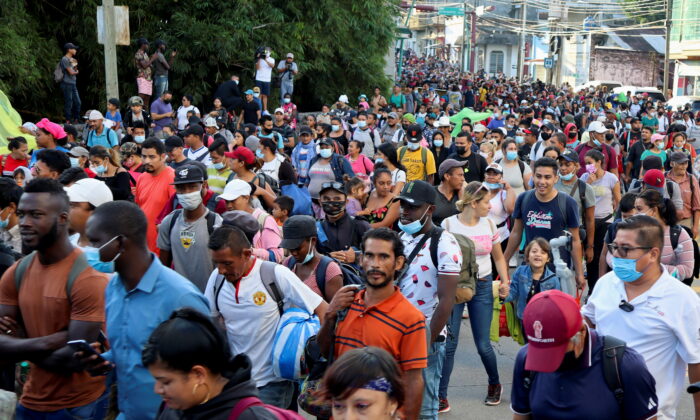 A caravan consisting of migrants from Central America and Haiti make their way through Tapachula, in Chiapas state, Mexico, on Oct. 23, 2021. (Jose Torres/Reuters)
US News

Texas Attorney General Ken Paxton has accused the Biden administration of not following federal laws and “inviting” illegal migrants by changing policies meant to discourage them from entering the country.

Paxton’s comments come as a migrant caravan with almost 3,000 Haitians and Central Americans reportedly departed Tapachula, Mexico late last week and were heading towards the southern border, according to Mexican news reports and social media.

“The Biden administration is not doing what they need to do to stop this. As a matter of fact, they’re inviting it,” he said. “The border patrol is frustrated with having to deal with logistics and handling these families.”

Paxton said border agents are risking their lives but “are not encouraged to do their jobs … or protect the border. They’re not allowed to have the resources that they need.”

Led by Center for Human Dignity leader Luis Garcia Villagran, the migrant caravan plans to join up with former Arizona activist Irineo Mujica in Veracruz and other migrants before entering the United States.

According to Customs and Border Protection (CBP) statistics, there have almost been 1.6 million illegal aliens apprehended during the fiscal year 2021. When migrants stopped at the border are included, the number comes to 2 million.

“It’s clear to me that the Biden administration does not want to stop this,” Paxton said. “They have changed all the policies that stopped this,” referring to Trump’s “Remain in Mexico” program.

Paxton said that his office had to sue the Biden administration seven times and that they had won, but the administration still hasn’t implemented the program for migrants to stay back in Mexico.

Regarding whether it was fair to condemn the administration for drug dealers and criminals being part of the people coming in, Paxton said, “They know these cartels are gaining strength … They charge for almost everybody that crosses the border. You’re not getting across without paying the cartels … an average of $8,000,” according to estimates from Border Patrol.

Paxton reiterated that if the administration just enforces laws passed by Congress, restricts migrants to Mexico, and deports criminals, there could be an immigration policy that works.

U.S. residents living near the border have to bear the brunt of the issue while Americans elsewhere are currently not impacted, Paxton said. “They’re not going to be affected like the people on the border whose property is being damaged, who are scared to go out at night or sometime even in the day,” because they don’t know who’s crossing their properties, he said.

“This is going to affect the entire nation because these people are moved around secretly, overnight on planes and buses … Some have COVID, some are drug-runners, potentially criminals, they could be terrorists. We don’t know … We aren’t able to keep track of them,” he said.

The White House has dodged difficult questions relating to the border and has refused to call it a “crisis,” instead saying it’s focusing on the “root causes” of illegal immigration and that it’s seeking a “fair, orderly, and humane” immigration system.

Last month, when asked by CNN whether he plans to visit the border, Biden said, “I guess I should go down. But the—but the whole point of it is: I haven’t had a whole hell of a lot of time to get down.”

Biden met with Mexican President Andrés Manuel López Obrador on Thursday to discuss a range of issues of which one was migration.