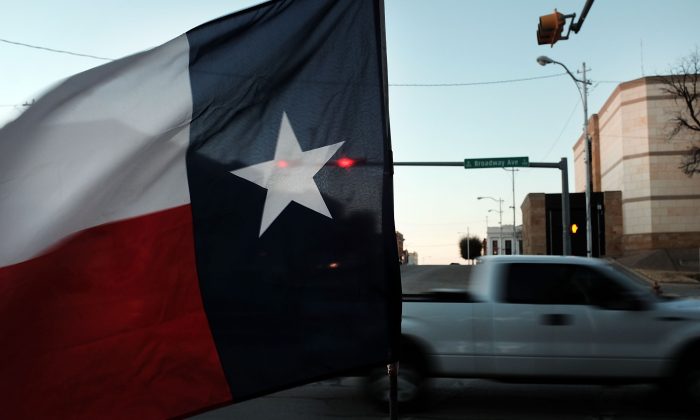 The Texas flag flies in downtown Sweetwater on January 19, 2016. (Photo by Spencer Platt/Getty Images)
US

Texans Voting to Secede From the US

At the state convention on May 19, Texas Republicans are going to debate and vote on whether or not Texas should secede from the United States at the Texas state convention.

The chances of them actually voting for secession are very low because it’s an unpopular position within the Republican party. The fact that it’s even suggested though, points to grassroots support within some of the conservatives in the state.

Currently there are 10 counties that have passed resolutions putting secession on the table at the convention.

Texas has a long and storied history of secession dating back to 1836 and the creation of the short-lived Republic of Texas which went bankrupt before joining the United States.

Since the Civil War, when Texas seceded with the Confederacy, calls for a Texas secession have come and gone every couple of years. The movement gained steam in the 1990s, and included an ill-fated armed standoff and kidnapping attempt by separatists including leader Richard Keyes in 1997.

Keyes was sentenced to 90 years in prison.

Texas separatism gained a national stage again in 2009 when then-Governor Rick Perry (R-TX) hinted at supporting separatism in a speech, and a poll showed 1-in-3 Texans thought that the state had the right to succeed.

In 2012, the Texas Nationalist Movement reported an uptick in support after the elections, and a “We the People” petition for secession with 125,000 signatures to the White House earned the curt answer “No,” although the movement appears to be growing.

Last fall, the Texas Nationalist Movement tried to get a secession-related resolution tacked onto Texas’s March GOP primary. The resolution read, “If the federal government continues to disregard the constitution and the sovereignty of the State of Texas, the State of Texas should reassert its status as an independent nation.”

In December, state party officials voted down the resolution, with one apologizing, saying “sorry we are even having the conversation.”

In 2016 10 of the 254 counties passed resolutions supporting Texas secession, and according to The Houston Chronicle and The Washington Post, “the fact that at least 10 counties are coming to the state convention supporting independence resolutions makes it difficult for party leaders to sweep this under the rug. It’s possible there will be some kind of a vote on the floor.”