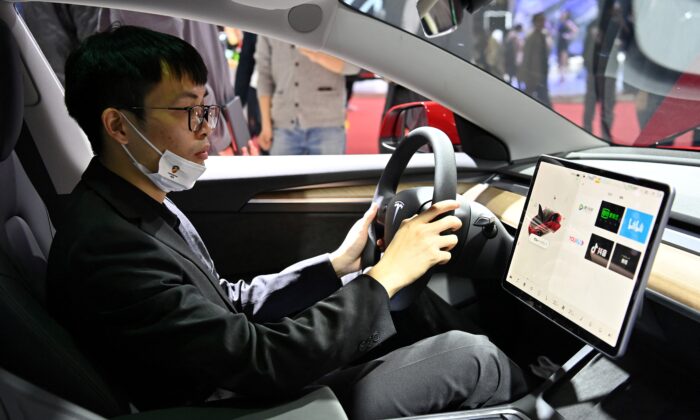 A man is seen inside of a Tesla car during the 19th Shanghai International Automobile Industry Exhibition in Shanghai on April 19, 2021. (Hector Retamal/AFP via Getty Images)
China Business & Economy

Tesla Establishes Data Center in China, With All Data to Be Kept in China

Tesla has established a data center in China, the company said last week, and data generated by all cars sold in the country will be stored domestically.

A May 25 post on the Weibo social media site said that the data center has already been built and the company plans on expanding its data network in China.

Tesla also said they want to start a platform where Tesla owners can make inquiries regarding their cars, and focus their efforts on ensuring the smooth operation of their databases as well as safeguarding customer data.

The column Daily Car Watch on Chinese news portal Sohu wrote on May 26 that these data centers are a response to the Chinese regime’s agencies blocking Tesla from operating in China. They are also addressing incidents of data loss that led to car owners complaining the cars’ brakes were malfunctioning.

According to Reuters, citing anonymous sources, employees in various Chinese Communist Party (CCP) departments were not allowed to park their Tesla cars in the vicinity of the regime’s offices due to the security risks presented by the cameras installed in Tesla vehicles. Despite many other cars also having similar technology installed in them, the ban only applies to Tesla, according to Reuters.

The data centers also stirred up conversation among netizens in China.

NeochaEDGE, which is recognized as one of the top 10 most influential Weibo accounts reporting on the digital world, said that Tesla is becoming another Guizhou-Cloud Big Data.

One Chinese netizen said that it was clear who was pushing for Tesla’s move behind the scenes, attempting to obtain control over Tesla’s data.

Another netizen said that Tesla’s actions were inevitable and how leaving their data in China under CCP control was the company’s ticket into the Chinese market.

On May 12, the CCP’s digital office issued “Provisions on the Management of Automobile Data Security (Draft for Solicitation of Comments)” that set the boundaries for automobile data security.

Article two of the provision says how in the “process of design, production, sales, operation, maintenance, and management of automobiles within the territory of the People’s Republic of China, operators shall collect, analyze, store, transmit, query, utilize, delete, and provide (hereinafter collectively referred to as process) personal information or important data overseas in compliance with relevant laws and regulations and the requirements of this regulation.”

Tesla reposted the regulation on its official Weibo account and stated, “We support this decision.”