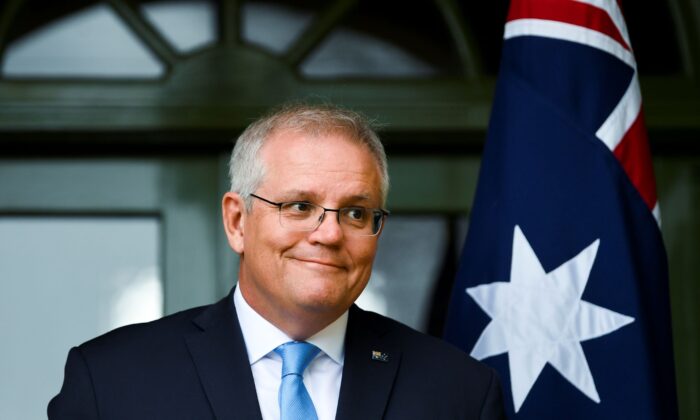 Australian Prime Minister Scott Morrison has backed a bill that would give women and girls the right to play single-sex sports by making it legal to ask a male competitor not to play in the female category.

Tasmanian Senator Claire Chandler, an advocacy for women’s sports,  proposed the “Save Women’s Sport Bill” to parliament on Feb. 10. Chandler said it is “unacceptable” that the current Commonwealth laws threaten sports clubs and associations with legal action if they exclude males from women’s sports.

“The Sex Discrimination and Other Legislation Amendment (save Women’s Sport) Bill 2022 I am introducing today will make clear that single-sex sport for women is lawful, encouraged and supported by the parliament of Australia,” she said. “What it does do is seek to restore respect for women’s rights and acknowledge the long-understood reality that categorisation by sex is important in the vast majority of sports.”

She added that the bill “does not seek to ‘ban’ anybody from playing sport” as it also allows sporting codes to offer a range of categories and competitions to maximise participation and inclusion.

On Feb. 22, Morrison said he endorsed Chandler’s proposal when asked about his thoughts on the bill at a press conference in the Tasmanian marginal seat of Lyons.

“I support it, I think it is a terrific bill and I’ve given her great encouragement,” he told reporters. “Claire is a champion for women’s sports and I think she has been right to raise these issues in the way that she has.”

National LGBTIQ+ group Equality Australia on Feb. 22 criticised the prime minister for “again making the lives of trans and gender diverse kids the subject of political and media debate.”

“This is completely unacceptable, particularly when this group of people already experience disproportionate levels of discrimination, marginalisation and social isolation,” said Anna Brown, CEO of Equality Australia in a media release to The Epoch Times.

Equality Australia called Chandler’s bill “cruel and divisive” and argued “sport should be for everyone.”

“We know the overwhelming majority of people in Australia believe that trans and gender diverse people deserve the same rights and protections as other Australians, a fact that the Prime Minister failed to understand when he refused to fulfil his promise to protect trans kids in religious schools during the Religious Discrimination Bill debate.”

The debate of transgender women’s inclusion in women’s sports has been dominating the global sports arena in the past few years, with concerns raised about unfair advantages of biological males and the censorship of female athletes speaking up in support of single-sex sports.

In early February, 16 members of the Pennsylvania women’s swimming team wrote in a letter that if trans female swimmer Lia Thomas were to be eligible to compete against female swimmers, Thomas could break Penn, Ivy and NCAA Women’s Swimming records; “feats she could never have done as a male athlete.”

The swimmers revealed they had been told if they spoke out against Thomas’s inclusion into women’s competitions, they “would be removed from the team or that we would never get a job offer.”

Katherine Deves, co-founder of Save Women’s Sports Australasia, told The Epoch Times on Nov. 23, 2021, that it is “a false premise” to assume that trans people are marginalised as evidence shows “transgender lobby groups have huge influence and power” over the government and the media.

“There is no sort of measurements or tests to determine what someone’s gender identity is; it’s all based on a self-declaration,” Deves noted.

The previous federal Labor government replaced the sex-based definitions of “man” and “women” in the Sex Discrimination Act in 2013 with gender identity and created provisions that grant male-born athletes the right to take legal action if they are barred from the women’s category.