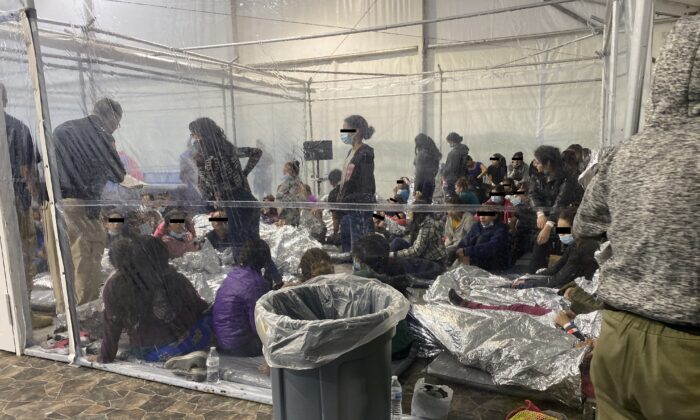 The photos show children sleeping on the floors along with makeshift beds.

Cuellar, whose office first shared the photos with Axios, told the news outlet that one “pod” held more than 400 unaccompanied male minors. The pods are supposed to hold a maximum of 260 people, he said.

The pods provide “terrible conditions for the children,” Cuellar added, saying these children should be moved to be housed and cared for by the Department of Health and Human Services.

Over the weekend, Department of Homeland Security Secretary Alejandro Mayorkas visited areas along the border, but his office restricted media access. A number of news outlets have said that their journalists and photographers have been denied access.

Cuellar told Axios that he didn’t visit the Donna facility himself, adding that the photos were provided to him as he attempts to raise awareness of the situation at the border.

Customs and Border Protection (CPB) agents are “doing the best they can under the circumstances” but are “not equipped to care for kids” and “need help from the administration,” he said. “We have to stop kids and families from making the dangerous trek across Mexico to come to the United States. We have to work with Mexico and Central American countries to have them apply for asylum in their countries.”

White House press secretary Jen Psaki responded to a question from a report about the photos.

“These photos show what we have long been saying, which is these border patrol facilities are not places made for children,” Psaki told reporters at the White House on Monday. “They are not places we want children to be staying for an extended period of time. Our alternative is to send children back on this treacherous journey. That is not in our view the right choice to make.”

“Children presenting themselves at our border who are fleeing violence, who are fleeing prosecution, terrible situations, is not a crisis,” she said in elaborating. “We feel it is our responsibility to humanely approach this circumstance.”

But over the past several weeks, Cuellar issued several warnings about the border crisis, saying that President Joe Biden’s administration needs to improve its messaging.

“You just can’t say, ‘Yeah, yeah, let everybody in’—because then we’re affected down there at the border,” he remarked, adding, “The bad guys know how to market this.” Cuellar’s district lies along the U.S.-Mexico border.

In a series of TV interviews on Sunday, Mayorkas fielded questions about how the White House is dealing with the surge along the border.

“We are expelling families. We are expelling single adults. And we’ve made a decision that we will not expel young, vulnerable children. I think we are executing on our plans​,” Mayorkas told NBC News’ “Meet the Press” on March 21.​

“We have a short-term plan, a medium-term plan, and a long-term plan, and the president and I have spoken to this repeatedly. Please remember something: That ​President ​[Donald] ​Trump dismantled the orderly, humane, and efficient way of allowing children to make their claims under United States law in their home countries​,” the secretary stated in response to a question about whether Biden’s statements encourage illegal immigration, without elaborating.

The Epoch Times has reached out to the White House about the photos.