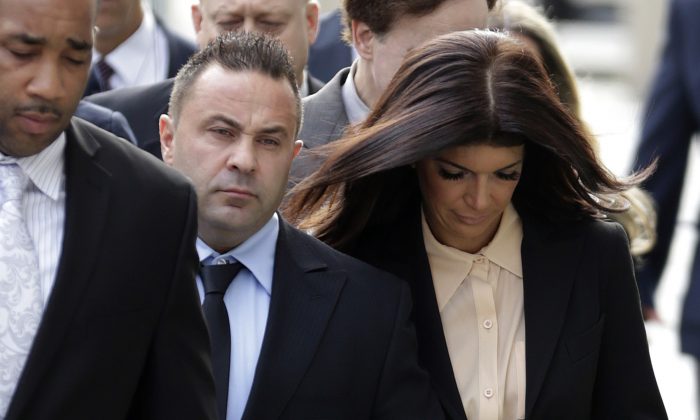 Teresa Giudice of the Real Housewives of New Jersey will reportedly file divorce papers to split with husband Joe Giudice.

Giudice will spend 15 months in prison starting next January. After that, her husband will start his 41-month-long jail term.

There’s also been reports that she’ll be involved in a cooking show after she leaves prison.

But according to a report from the Daily Mail, Giudice will likely file for a divorce.

“Aside from her career, Teresa is also planning to file for divorce, as soon as she gets out of jail and gets back home with her girls and Joe is carted off to do his time,” a source close to the matter told the paper. “Teresa is livid with Joe for putting her in this position so she is fed up and going to send him the divorce papers and tell him to sign them while he is sitting in cell— or else!”

The source added: “She trusted Joe and that’s why they got into trouble — he was greedy and did some shady deals to live large…This has been a huge wake-up call for Teresa but she is not going to lay down and give up!”

Reports this week indicated that Giudice will be home during Thanksgiving.

“It will be a quiet Thanksgiving for Teresa,” another source told E!. “She will be with her family, but it will be private and low-key. Nothing over the top. Just family and peace.”

The insider noted it “s a very difficult time for her. This Thanksgiving, she’s doing a lot of reflecting.”