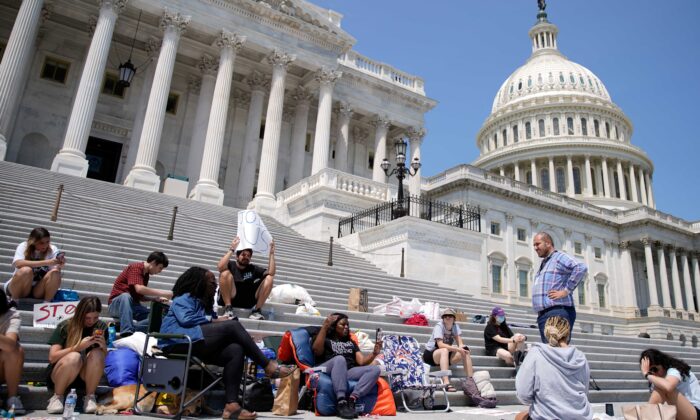 State and federal tenant eviction moratoria go beyond being “unconstitutional.” They’re a direct assault on the constitutional order itself. They represent insurrection from above.

I’m not prone to overstatement. Read on.

Surf the web, and you’ll find many critics of the moratoria—even in the establishment media. Under fire, in particular, is President Joe Biden’s purported extension of the Centers for Disease Control and Prevention (CDC) federal moratorium. Critics note that Biden has been able to cite no legal support for his action.

Critics also argue that the CDC’s order exceeds the scope of Congress’s authorizing statute and of the regulation issued under it. A majority of the Supreme Court agrees with this position (pdf).

Critics further claim that if we do read Congress’s statute broadly enough to authorize the CDC’s order, then Congress exceeded its power to delegate to an executive agency. While they acknowledge that the modern Supreme Court has greatly expanded the scope of Congress’s power under the Constitution’s Commerce Clause and its Necessary and Proper Clause, they contend that the order exceeds the scope of this expansion.

All of those are sound arguments. But in my view, they miss the nub.

Soon after the Revolutionary War (1775–1783), the United States fell into an economic recession. Many people found it difficult to pay their debts. Creditors found it hard to collect on debts.

The law of the 1780s, like the law today, wasn’t heartless. When honest debtors couldn’t pay honest debts, there were several options available to them. One was to resort to bankruptcy law, where debts were structured in an orderly way. Under the Articles of Confederation, bankruptcy was an area of state responsibility. Another option was to petition a court of equity, which, depending on circumstances, could relieve debtors from some kinds of contracts. A third option was voluntary debt restructuring by the parties themselves. There were many reasons people might want to restructure the debt themselves, including the cost, delay, and uncertainty of taking the matter to court.

In all of these proceedings, the judge or the parties could tailor the solution to the individual circumstances of the debtor and creditor. They could consider the need for justice in each case and try to minimize harm to all concerned.

However, during the 1780s, more voters were debtors than creditors, so demagogues persuaded state legislatures to adopt sweeping laws excusing debts without regard to justice or individual circumstances. These laws essentially confiscated existing debts, in whole or in part. Most people seem to have thought these measures were wrong, but desperation and political dynamics forced their passage anyway.

Tender laws required creditors to accept payment in severely depreciated currency. A creditor owed $100 might have to settle for paper money worth $10, although the debtor was fully able to pay. Pine-barren laws and some tender laws forced creditors to accept nearly worthless assets in full “payment.” Installment laws and stay laws—such as the current eviction moratoria—postponed debt collection.

The Constitution’s Framers considered these laws profoundly immoral. This was because they robbed one class of people to benefit another, irrespective of the justice of each individual case. Moreover, the Framers knew that many creditors and landlords were far from rich. Then as now, landlords and other real estate investors often were eking out a living from their returns.

The Framers discovered that these laws were aggravating and prolonging the recession. They increased uncertainty, raised interest rates, caused capital to disappear, and discouraged new investment.

The Framers had learned their lesson. They were determined that “stay laws” and their ilk would never again plague U.S. society, and they drafted the Constitution to block them.

First, they drew the line between state and federal jurisdiction so that the landlord-tenant relationship and most debts were subject to state authority alone. Congress and executive branch agencies would have no general power to meddle with real estate, including landlord-tenant law. The federal government would have some power over debts, but this would be limited to transactions in foreign or interstate commerce—such as credit extended by Philadelphia merchants for goods shipped to England or Virginia. The framers did permit Congress to issue paper currency (pdf), but principally because it might be necessary to finance a war.

As for Congress’s power to “make all Laws which shall be necessary and proper” for carrying out other powers, the Constitution’s advocates pointed out that this clause (1) covered only incidental transactions and (2) was merely a clarifying provision that granted the federal government no additional authority.

As further protection, the Founders adopted the Fifth Amendment, which banned federal seizure of property (both real and personal) without due process or just compensation.

The Founders left in place debtors’ traditional remedies: The states could adopt their own bankruptcy laws until Congress superseded them. Courts of equity could still grant relief against what Alexander Hamilton called “hard bargains.”

In addition to banning unjust federal measures, the Framers inserted specific prohibitions on unjust state laws. Article I, Section 10 provides that no state may “make anything but gold and silver coin a tender in payment of debts; pass any … ex post facto law, or law impairing the obligation of contracts.” The ban on laws impairing the obligation of contracts (called the “Contracts Clause”) was targeted directly at stay laws, such as the current moratoria.

Law school constitutional law case books—most of which are biased to the left—create the impression that the Supreme Court largely eviscerated the Contracts Clause in Home Building & Loan Ass’n v. Blaisdell (pdf), decided in 1934. They create this impression by omitting three Supreme Court decisions issued shortly thereafter in which the court retreated substantially from the anti-Contracts Clause stance in Blaisdell. Eviction moratoria, however, often are insufficiently targeted to satisfy even the weak requirements of Blaisdell. In other words, modern judicial interpretations don’t justify eviction moratoria.

Eviction moratoria stab at the essence of the Constitution itself. Officials adopting them have repudiated the very document by which they claim power and legitimacy: Ipsi dixerunt*—they’ve declared themselves usurpers. Even at the risk of punishment, landlords, tenants, and judges should treat their decrees with contempt.

*“They themselves have said it.” The plural of the more common “ipse dixit.”

Robert G. Natelson, a former constitutional law professor, is senior fellow in constitutional jurisprudence at the Independence Institute in Denver. He is the author of “The Original Constitution: What It Actually Said and Meant” (3rd ed., 2015) and of extensive scholarship on federalism and the Constitution’s Commerce and Necessary and Proper Clauses. He is not a landlord.