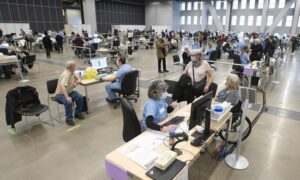 GATINEAU, Que.—Investments needed to expand Canada’s Internet grid would slow to a trickle if the big service providers were forced to allow smaller players to access their so-called fibre-to-the-home networks, Bell Canada says.

At hearings that could determine the future of Internet service in Canada, executives from Bell are urging the Canadian Radio-television and Telecommunications Commission to let market forces drive competition.

“If there are rules in place that make building (networks) in the first place unprofitable, we will not build to a community,” Bell executive vice president Mirko Bibic said Wednesday.

“The consumer will suffer from that, because they’ll have the choice of only one high speed network, which is the cable network, or none at all.”

The Canadian Network Operators Consortium, representing independent Internet service providers, dismissed that argument, predicting that Bell and other telcos would continue making investments in fibre in order to compete with cable companies.

“They have a natural incentive to build wherever there is a cable carrier because otherwise the cable carrier will eat their lunch,” said Chris Tacit, the consortium’s legal counsel.

Bell’s arguments stood in stark contrast to those of fledgling player Primus, which has called for regulations to allow access to the so-called “last mile” of the Internet connection highway: the fibre-optic lines that are being installed into people’s homes that can dramatically improve Internet speeds.

Primus has called on the CRTC to regulate the entire wholesale Internet market to “disrupt the broadband duopoly” that it said exists in Canada.

“We do not believe that a marketplace of two incumbents is good enough for Canadian consumers,” Primus CEO Michael Nowlan told the regulator Tuesday.

But there is already stiff competition between the big players for consumer dollars, and more time is needed to determine whether further regulations are needed to spur competition, Bibic said.

“None of the evidence supports mandating access to our fibre-to-the-home networks now,” he said. “So, today, don’t mandate access.”

Bibic pointed to regulations imposed on the industry in 2004, saying the rules effectively shut down investments that would have otherwise been made because the CRTC artificially reduced prices, making it cheaper to lease infrastructure that competitors already had in place.

CRTC hearings being held in Gatineau, Que., this week and next are the final of several reviews aimed at finding a balance between customer access and the need of telecom services providers to make a profit.

The review of Canada’s wholesale “wired” Internet market is focused on whether cable and telecom companies should be required to share with smaller competitors the infrastructure that brings Internet services directly into homes.

The big telecoms have been investing in fibre-optic technology, which offers the vastly improved broadband speeds needed to stream videos and place phone calls over the Internet.

Until recently, copper phone lines and coaxial cable were the main means of providing Internet services to home customers.

The CRTC also conducted hearings earlier this year into the future of television and Canada’s wireless industry.

While the regulator hasn’t ruled yet on whether wireless firms must share cell towers, it has forced the telecom companies to allow customers to terminate their services without making them pay cancellation fees.