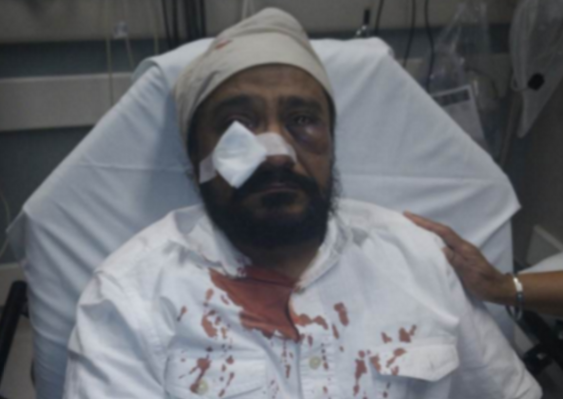 Inderjit Singh Mukker, 53, in the hospital after being attacked. (The Sikh Coalition)
Crime and Incidents

Teen in Darien, Illinois Who Pled Guilty to Sikh Beating Gets Community Service

CHICAGO—A suburban Chicago teenager who punched and shouted racial slurs at a Sikh man last year was sentenced to two years’ probation on Wednesday after pleading guilty to a hate crime charge.

Investigators said the September incident happened during a road-rage incident in Darien, about 20 miles southwest of Chicago. Under the plea agreement, the teen also was ordered to pay nearly $5,000 in restitution and perform 200 hours of community service — including time in the Sikh community — in exchange for prosecutors dropping felony aggravated battery charges, according to the DuPage County State’s Attorney’s Office.

The teen also was accused of punching an officer when confronted at his home, though charges related to that incident also were dropped.

The Sikh Coalition, which had urged prosecutors to pursue a hate crime charge, said the plea was significant.

“The importance of obtaining a hate crime conviction is not about pushing for a harsher penalty but about ensuring that our government and the American public acknowledge the problem of hate and addressing that hate,” said Harsimran Kaur, the faith group’s leader. “Charging him, the guilty plea and sentencing him is an important step in addressing this epidemic of hate crimes.”

“We must … do more to combat this problem together” -Harsimran Kaur on hate crime charge: https://t.co/paffipFAMv pic.twitter.com/fhfI7WZFbW

The teen could have faced a maximum sentence of five years’ probation and 30 days in custody for the hate crime charge, according to Paul Darrah, a spokesman for DuPage County prosecutors. The teen’s name hasn’t been released because of his age. He was 17 at the time of the incident.

Kaur said she hopes that serving the Sikh community will remind the teenager that “it is not acceptable to target people who are different from him,” but also be an opportunity “for him to open his mind and his heart.”

Investigators said the teen yelled racial slurs at the victim, Inderjit Mukker, while the two were driving in their vehicles. Both later pulled over, and Mukker remained in his vehicle. But the teen climbed from his vehicle and punched Mukker with enough force to break his cheek, according to Kaur.

When police arrived at the teen’s home in nearby Willowbrook, authorities said he allegedly punched one of the officers in the face.