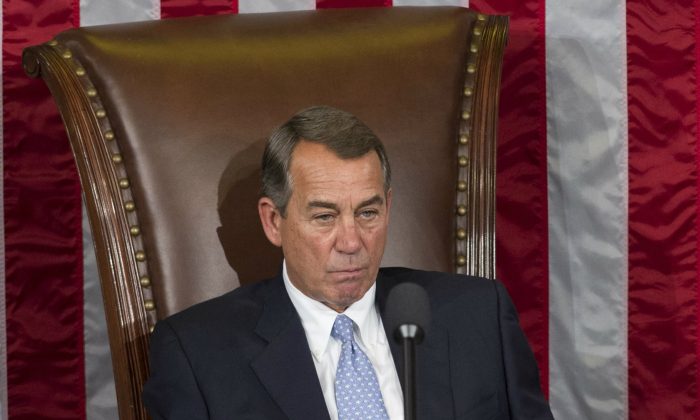 Outgoing Speaker John Boehner, Republican of Ohio, sits in the Speaker's chair for the final time as Speaker in the House Chamber at the US Capitol in Washington, DC, October 29, 2015. (SAUL LOEB/AFP/Getty Images)
Politics

Ted Cruz responded to former GOP Speaker of the House John Boehner saying he let his “inner Trump” come out:

“John Boehner had some interesting comments last night,” Cruz said. He added that Boehner has “allowed his inner Trump to come out.”

Cruz’s reaction comes after Boehner said Cruz was “Lucifer in the flesh” to an audience at Stanford on Wednesday night, according to the Stanford Daily.

“I have Democrat friends and Republican friends. I get along with almost everyone, but I have never worked with a more miserable son of a [expletive] in my life.”

Cruz denies any relationship with the former speaker, saying “I’ve never worked with John Boehner. Truth of the matter is I don’t know the man.”

I’ve met John Boehner two or three times in my life. If I have said 50 words in my life to John Boehner, I’d be surprised, and every one of them has consisted of pleasantries. ‘Good to see you, Mr. Speaker.’ I’ve never had any substantive conversations with John Boehner in any respect.

The Republican nominee elaborated on Twitter, tying Boehner to Trump:

Tell me again who will stand up to Washington? Trump, who’s Boehner’s “texting and golfing buddy,” or Carly & me? https://t.co/qvYPSaTEV7

The tweet refers to Boehner, who has said that he and Republican frontrunner Donald Trump are “texting buddies” and that they’ve played golf together for years.

This is not the first time that Boehner has made public remarks about his disdain for the Texas Senator, having also called him “Lucifer” last month, while endorsing Paul Ryan:

“They all had a chance to win. None of them won. So I’m for none of the above. I’m for Paul Ryan to be our nominee.”

Boehner has been critical of Cruz for trying to shut down the government over Obamacare in 2013 prompting Boehner to call Cruz a “jackass.”

Cruz has since said that “the single biggest mistake” of his attempted shutdown was not explaining his strategy “to elite opinion makers”:

“The single biggest mistake during the Obamacare defund find that I think I made was that I and our allies did not spend enough time explaining the specific strategy to elite opinion makers. There was confusion that made it less effective.”

Cruz: ‘Carly may become the first vice president in history to have a very impressive fluency with heart and smiley face emoticons’

The Texas Senator is campaigning in Indiana ahead of the May 3 primary that he hopes to win in an attempt to stop frontrunner Donald Trump from getting a majority of the delegates.