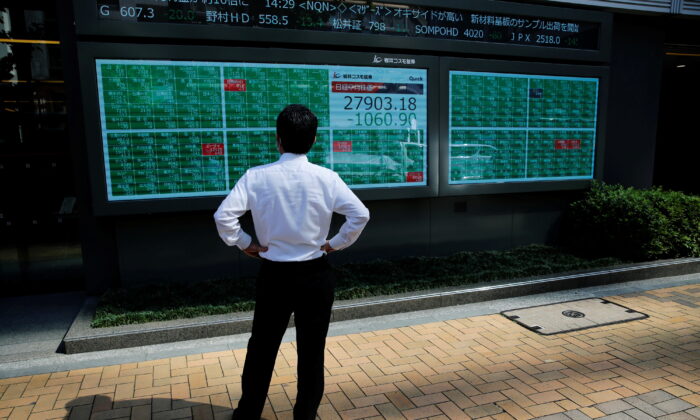 A man watches an electric board showing Nikkei index outside a brokerage at a business district in Tokyo, Japan, on June 21, 2021. (Kim Kyung-Hoon/Reuters)
Markets

Asian markets also have their eyes on the U.S. Federal Reserve, which is expected to tighten interest rates this year. What happens in China is also likely to have regional repercussions.

Major companies, including automakers such as Toyota, had been counting on a recovery in the supply of semiconductor chips and other products from China and the rest of Asia. The recent surge in infections by Omicron has thrown a wrench into such hopes.

On Wall Street, a broad wave of selling had the S&P 500 down by 2 percent in early going, but a late-afternoon burst of buying left the benchmark index with a loss of just 0.1 percent. The Dow Jones Industrial Average fell 0.5 percent after having been down 1.6 percent, and the tech-heavy Nasdaq eked out a gain of less than 0.1 percent after having been down 2.7 percent.

The latest pullback followed a sell-off last week as investors shifted holdings in anticipation that the Federal Reserve will raise interest rates this year, among other moves aimed at lowering inflation. Wall Street is trying to get a better read on when and by how much the Fed will lift rates.

“It has the market a little bit rattled from the uncertainty of it all,” said J.J. Kinahan, chief strategist with TD Ameritrade. “I would expect volatility to continue to stay elevated for the rest of the first quarter, at least, as we continue to grapple with this question.”

The selling began to lose momentum at the same time as a rise in Treasury yields eased. The 10-year Treasury briefly hit 1.84 percent before slipping back to 1.76 percent by late afternoon. That matches where the yield was late Friday.

Early on, when bond yields were rising, technology stocks were the biggest drag on the S&P 500. Higher interest rates make the stocks of expensive tech companies and other pricey growth companies less attractive to investors, which is why the sector has been slipping as bond yields rise. The tech sector has been the biggest weight on the market through January and is coming off of its worst week since October 2020.

Big technology stocks have an outsized influence on the S&P 500 because of their huge size. Coming into the year, the technology sector represented 29.2 percent of the S&P 500.

Higher interest rates could help corral the high inflation sweeping the world, but they would also mark an end to the conditions that have put financial markets in “easy mode” for many investors since early 2020. The Fed has said it will accelerate the reduction of its bond purchases, which have helped keep interest rates low. The market now puts the chances of the Fed raising short-term rates by at least a quarter point in March at around 78 percent. A month ago, it was about 36 percent.

Industrial stocks, banks and a mix of companies that rely on consumer spending accounted for a big share of the S&P 500’s decline Monday. Those losses were kept in check by gains in health care, technology and communication stocks.

Take-Two Interactive, maker of “Grand Theft Auto,” plunged 13.1 percent for the biggest decline in the S&P 500 after announcing a deal to buy Zynga, which makes “Words With Friends” and “Farmville.” Zynga jumped 40.7 percent.

Investors have a busy week of economic reports and corporate earnings.